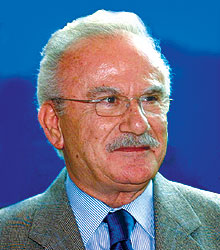 Pierre Sadek, one of the most well-known political caricaturist, passed away today after suffering with illness. Pierre Sadek began his career as a cartoonist after graduating from the Lebanese Academy of Fine Arts, in and soon after that he family newspaper “An-Nahar”.

The renowned Caricaturist worked for more than 45 years in the newspaper the day, and was a close friend of the late Ghassan Toueini.

He continued for many years to express himself through political criticism in the news bulletin on LBCI channel with his favorite character and well-known to the Lebanese, “Touma”, before moving to the Future TV where he ended his career.

BeirutNightLife.com extends its condolences to the family and friends of Pierre Sadek.

May he rest in peace..