Haifa Wehbe at the Grammy Awards 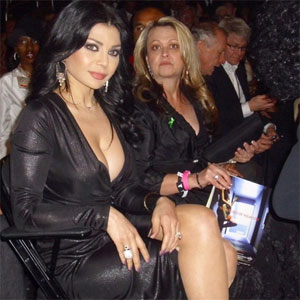 Haifa Wehbe attended the Grammy Awards a few days ago in Los Angeles. She wore a black Versace gown that revealed a lot of leg and cleavage.

Haifa also tweeted about Whitney Houston’s death, expressing her sadness:
“The world lost a true legend. This is so heartbreaking. She was loved despite her troubles. This is surreal 🙁 RIP Whitney Houston”

What do you think of Haifa’s choice of dress at the Grammy’s?