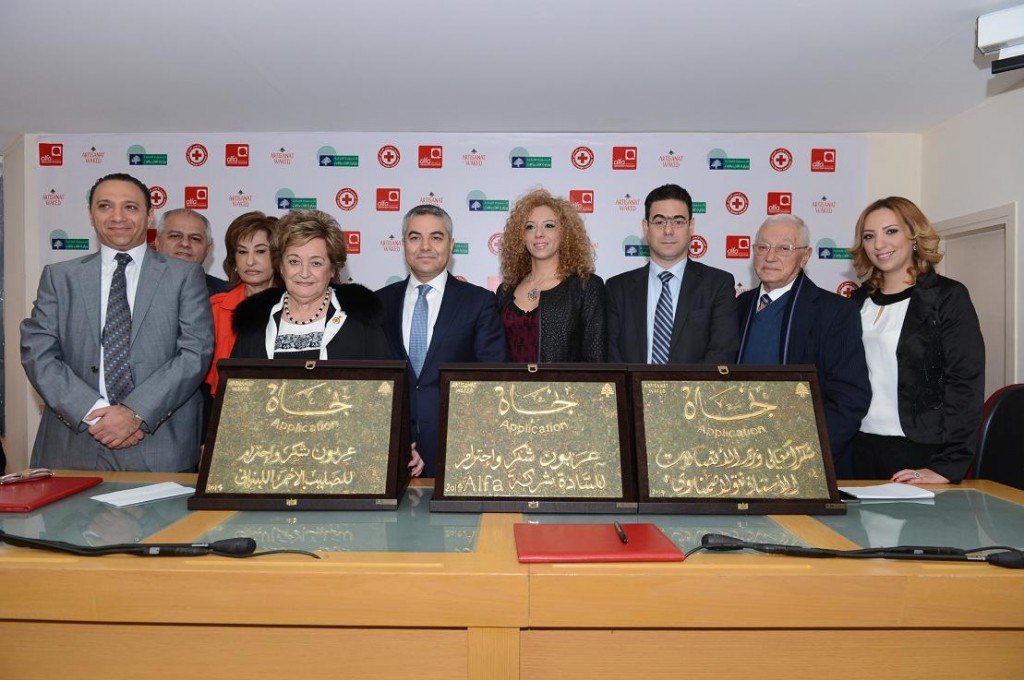 Speaking on behalf of the Waked family, Ms. Rola Waked explained that the idea of ​​this application saw the light after the family lost their mother, “Najat”, because the Red Cross paramedics couldn’t get there in a timely manner when the family found it difficult to specify the house’s location over the phone, for lack of precise street name and number.
She said: “At first, we studied the idea at my brother’s company, Procomwave before presenting it to the Lebanese Red Cross, which more than welcomed it”.

She pointed out that “the financing of the project requires between 400 and 500 thousand dollars to cover the costs of: 300 subscriptions to the 3G service and 300 electronic boards on the Lebanese Red Cross ambulances. This is in addition to the cost of the application programming and training”.
She then added: “Minister Sehnaoui praised this initiative and agreed to provide all 3G subscriptions for free”  and “Alfa agreed to provide full support to cover the costs of the application and training, as well as equipping the ambulances with tablets”. She concluded by thanking “His Excellency Minister Sehnaoui and Alfa for their support”.

Mrs. Awaiss “saluted the Waked family who turned its tragedy into hope for others, and particularly Mr. Elie Waked, who wanted others to benefit from what he went through. This generous gesture led to combined efforts to help citizens wherever they are.”
Awaiss thanked “His Excellency Minister Sehnaoui, who “laid out the ministry’s path to technical and scientific progress, and without whom this project wouldn’t have seen the light, because he mobilized the necessary resources, money, and expertise.”

She also thanked Alfa “for its constructive contribution to this national project aimed at alleviating the suffering of citizens and facilitating the work of paramedics”. Mrs. Awaiss extended her gratitude to all those who contributed to its implementation. She indicated that it is possible today “to achieve a great deal of success at all levels despite limited resources, thanks to concerted efforts and the motivation of young volunteers”. She concluded by saluting the 2700 volunteers in the Lebanese Red Cross.
Hayek

In his speech, Mr. Hayek said that “Alfa is proud to sponsor this pioneering initiative that emphasizes once again our active role in the community through our Alfa 4-Life CSR program”.
He added that “the moving testimonial of the Waked family shows how suffering can often drive to innovation”.

Hayek pointed out that this “initiative demonstrates that if we use technology in a constructive manner, it will certainly serve noble goals and contribute to saving lives, but if we misuse it, it will give the opposite result, as is the case with using cell phones use while driving”. He reminded the audience about the “campaign launched by Alfa last year titled ‘the cost of a call is too costly while driving’, which called on all cell phone users to refrain from messaging and talking over the phone when driving because this endangers their lives.”
Hayek hoped that “this initiative will be a prelude to a more comprehensive cooperation with the Lebanese Red Cross, which is dear to all our hearts”.
Sehnaoui

Minister Sehnaoui commended the concerted efforts of both the public and private sectors, as well as civil society, which are at all the service of man and Lebanon in such a touching manner”. He pointed out that this synergy “brought back to mind how man can greatly benefit from technology and develop it positively in order to be at the service of man and the noble mission of the Red Cross.”
He added that “the most important advantage of the application is that it will help save lives, because a few seconds can be decisive in a person’s life”.
He concluded “We hope that all the parties will have this noble and positive human spirit and put the public interest and the interests of future generations and the Lebanese youth above all else so that we can save Lebanon, and It seems that politics in Lebanon is in need of the efforts of the Red Cross.”
Then the sponsorship agreement was signed between Hayek and Kettaneh, and an honorary shield of appreciation was presented by the Waked family to Sehnaoui and Hayek.