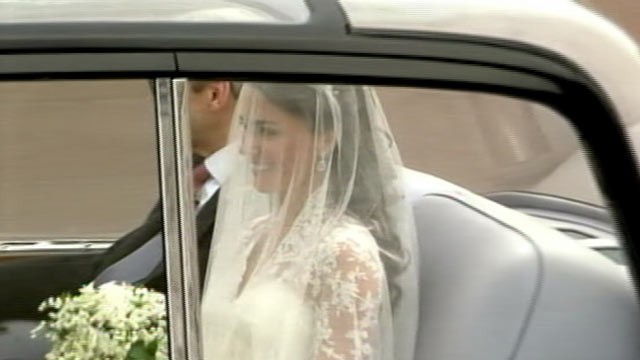 Royal bride Kate Middleton’s wedding dress is an ivory gown with lace applique floral detail designed by Sarah Burton at Alexander McQueen, it was announced today, according to Independent.

The train and bodice are decorated with delicate lace applique flowers, handcrafted using the Carrickmacross lace-making technique, which originated in Ireland in the 1820s.

St James’s Palace said the bride chose British brand Alexander McQueen for the “beauty of its craftsmanship” and its “respect for traditional workmanship and the technical construction of clothing”.

Kate worked closely with Burton, who was widely speculated to have won the coveted job to create the historic bridal gown, on the design.

“She had a vision in mind that she wanted to support the Arts and Crafts tradition,” St James’s Palace said.

The dress’s lace design incorporates the rose, thistle, daffodil and the shamrock – the four floral emblems of the United Kingdom.

The soon-to-be Duchess of Cambridge, who usually wears her hair fully down, choose a “Demi Chignon” for her wedding day instead.

Her tiara – the little known 1936 Cartier “halo” – was her “something borrowed” and was loaned to the bride by The Queen, a tradition for royal weddings.

The veil, which falls to just below her waist, is made of layers of soft, ivory silk tulle and is decorated with a trim of hand-embroidered flowers.

The top secret dress, which up to two billion people watching across the world were waiting to see, has sleeves – appropriate for a religious wedding in the holy surrounds of Westminster Abbey.

Kate’s ivory satin bodice, which is narrowed at the waist and padded at the hips, draws on the Victorian tradition of corsetry – a hallmark of Alexander McQueen’s designs.

Down the back are 58 gazar and organza covered buttons fastened by Rouleau loops.

The underskirt is made of silk tulle trimmed with Cluny lace.

The lace applique for the bodice and skirt was hand-made by the Royal School of Needlework, based at Hampton Court Palace.

Workers washed their hands every 30 minutes to keep the lace and threads pristine, and the needles were renewed every three hours, to keep them sharp and clean.

With the lace coming from different sources, great care had to be take to ensure that each flower was an absolutely identical colour.

Kate’s shoes were also hand-crafted by the Alexander McQueen team.

Made of ivory duchesse satin, they also featured lace – hand-embroidered by the Royal School of Needlework.

The bride’s earrings were a touching wedding day gift from her parents, Carole and Michael Middleton.

They were created by Robinson Pelham and are diamond-set stylised oak leaves with a pear-shaped diamond set drop and a pave set diamond acorn suspended in the centre.

They were inspired by the Middleton family’s new coat of arms, which includes acorns and oak leaves and was created to echo the tiara.

The earrings are the bride’s “something new”. For her “something blue” – a blue ribbon was sewn into the interior of her dress, while her “something old” is the traditional Carrickmacross craftsmanship used to create the bridal gown.

Kate Middleton’s bridal flowers are a shield-shaped wired bouquet of sweet William, as well as myrtle, lily-of-the-valley and hyacinth.

Newer Post Intertainment 101 Ragheb Alame And Dj Jojo Live At BIEL
Older PostYour Own B018 Compilation: Sit Back and Relax and Enjoy