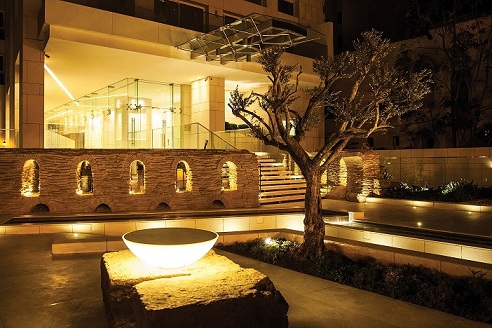 Al Massaleh Real Estate, a Kuwait based leading real estate development company, announced the launch of its latest state-of-the-art residential development, Saifi Crown; a 23 story building with reintegrated Roman ruins that were found and preserved within the edifice. Saifi Crown is located in one of Beirut’s most affluent districts; Saifi, andoverlooks both the Mediterranean coastline and Beirut’s skyline.

The event was held under the patronage of his Excellency, Mr. Raymond Araygi, Minister of Culture, represented by Dr. Assaad Seif who highlighted the significance of these Roman remainsand the commendable effort and investment made by Al Massaleh Real Estate to preserve them; adding to the country’s historical wealth.

The launch event was also attended by Mr. Mohammad Saoud Al Wugayan the Chargé d’Affaires at the Embassy of Kuwait in Lebanon, along with high profile business figures and representatives of the local media. Upon arrival, guests were given a guided tour of the archaeological site, which was followed by a speech from His Excellency, the Minister of Culture, Mr. Raymond Araygi addressed by Dr. Assaad Seif and from Al Massaleh Real Estate’s Chairman, Mr. Hamad Al Eisa.

Dr. Seif stressed on the importance of cooperation between the public and private sectors in order to preserve the archaeological heritage, especially in terms of keeping it in place of discovery through the adoption of sophisticated methods of in situ integration or reintegration into the construction projects built in urban spaces. He added that these findings represent a great importance on the historical,patrimonial and archaeological levels.Their reintegrationin their place of discoveryis of a grate public interest, not only in terms of preserving the “spatial memory”;but also in the consolidation of the links between the population and thematerial culture related to their history and heritage drawingbenefits in terms of strengthening the cultural identity of the community as a whole byallowing them to visit these sites and cultural monuments and interact with them. He also thanked the working team of archaeologists, Lebanese University doctors and architects who played a primary role in the success of the project, especially regarding the archaeological, scientific and technical aspects.

Commenting on this event, Al Massaleh Real Estate Chairman, Mr. Hamad Al Eisa, said, “At Al Massaleh Real Estate, we aim at making each new development an architectural monument, by constantly look into new designs that differentiate our projects from others, quality materials that ensure durability and longevity, and last but not least, prominent locations that enrich our land bank. By following this strategy, we find ourselves developing world class projects that bring added value to our shareholders, customers and the communities in which we operate.”

Saifi Crown consists of twenty-three storey overlooking the Mediterranean coastline and the heart of Beirut. It features 20 spacious apartments with six different layouts, varying from duplexes to simplexes. Attention to detail extends to every feature and can also be seen in the interiors and room layouts which provide ample natural lighting, along with its spaciousness and modern style, in addition to complete package of services available to all residents of the Tower.

Residents and visitors alike are not only taken by the layout of the building, but by the history it bears, where Al Massaleh Real Estate, in collaboration with The Directorate General of Antiquities (DGA)uncovered, carefully excavated and preserved a 2,000 year old archaeological ruins that include a Roman bath, a unique granite one-piece labrum, marble paths and mosaics. The ruins have been reintegrated within the architectural design, and are showcased through the landscaped exterior and displayed at the entranceof the building. Residents of the Saifi Crown enjoy a museum like environment at the comfort of their own home.

Mr. Hamad Al Eisa said, “On behalf of Al Massaleh Real Estate I would like to thank His Excellency, Mr. Raymond Araygi, the Minister of Culture, for the kind patronage of this event and for his continuous support and cooperation throughout the development of the tower. I would also like to give a special thanks to Mr. Gaby Layoun, former Minister of Culture, and to the DGA, especially Dr. Assaad Seif and Mr. Frederic Husseini for facilitating the reintegration process. I would also like to thank the Hawa Mujaes for the architectural design and NATCON for contracting who played an integral role in the successful completion of this project.Special thanks also go to Mr. Mohammad Saoud Al Wugayan from Kuwait Embassy for his presence here today and for taking the time to celebrate this momentous occasion.”

Massaleh has expanded regionally and now it operates in the Gulf, Middle East and Europe.