Afro Blues by the Blind Couple from Mali – Amadou and Mariam 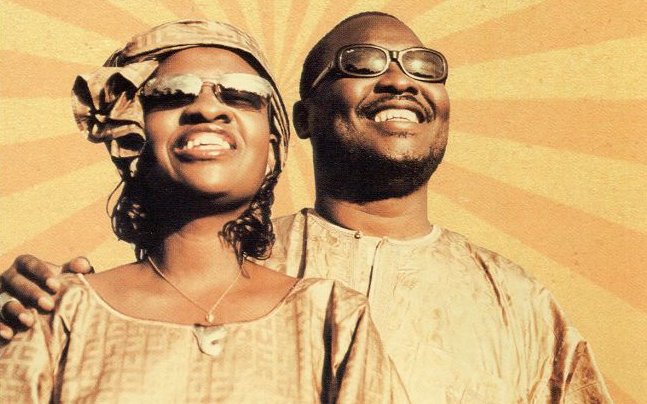 The best-selling act to come out of Africa this century, Amadou & Mariam have collaborated with the world’s biggest artists (Manu Chao, Damon Albarn…) both onstage and in the studio.

“The blind couple from Mali” – as they are also known – will win you over with their “Afro-blues”, a perfect blend of catchy pop tunes, rock guitar and African rhythms!

Welcome to the world of Amadou & Mariam, a sphere that now stretches from the dusty streets of Bamako to playing the mainstage at Glastonbury, and from the timeless traditions of Mali to playing the official FIFA World Cup Opening Concert in Johannesburg last summer.

Along the way they have performed with the likes of Damon Albarn, Manu Chao and the Scissor Sisters and have been enthusiastically embraced by Western rock fans. One minute they’re touring the US with Coldplay and the next minute, Pink Floyd guitar legend David Gilmour is sitting in with them on stage in London for a charity event. They recently played the Nobel Peace Prize concert in honour of Barack Obama, and were selected by Matt Groening (of The Simpson’s fame) to perform at his “All Tomorrow’s Parties” 2010 edition. All this has been achieved while remaining true to their roots and without compromising their authenticity. Their unique mix of unforgettable pop melodies and contagious rhythms, driven by Amadou’s bluesy electric guitar and the compelling interplay of their two voices, has its roots deeply planted in Africa. It’s easy to understand why some have dubbed Amadou & Mariam “the magic couple”. Yet in truth their achievements are down to a combination of craft and graft rather than supernatural charms.

Amadou Bagayoko and Mariam Doumbia both grew up in Mali. By the age of six Mariam had gone blind, a disadvantage that did not prevent her from becoming famous in her community as a singer at weddings and other traditional ceremonies. Amadou also lost his eyesight in childhood but was fascinated by music, first playing percussion and then taking up the guitar. They met in 1977 while attending the Institute for Young Blind in Bamako.

Influenced by the records of Jimi Hendrix and Pink Floyd as well as traditional African music, Amadou attended blind school by day but by night played guitar in the Ambassadeurs du Motel de Bamako, one of West Africa’s most legendary bands. He also began working in the institute’s own band with Mariam, who cites her influences as including James Brown, Eric Clapton and Pink Floyd alongside the great traditional female djelis of Malian song.

Defying the advice of the school authorities who felt their union could never work, they became a couple, both romantically and musically. On leaving the school in 1983, they began working as a duo. But there was no music industry in Mali, so they moved to Côte d’Ivoire.

Amadou and Mariam used Abidjan as a base to tour and expand their fame all over West Africa and recorded four cassettes that were released in the early nineties. In 1996, during a short residency in Paris, they met Marc-Antoine Moreau who secured them a record deal and has been managing them since then. Sou Ni Tile, their first album recorded outside Africa, appeared in 1998, and its first single “Je Pense A Toi” became a French radio hit. It was followed by two further albums, Tje ni Mousso (1999) and Wati (2002).

At this point enter Manu Chao. Having fallen in love with Amadou & Mariam’s music, he enthusiastically joined them on 2005’s Dimanche à Bamako, as producer and collaborator. This album propelled Amadou & Mariam high into the French charts and became one of the best-selling African albums of all time, winning them both a prestigious Les Victoires de la Musique award (the French equivalent of the Grammys) and two BBC Radio 3 Awards for World Music.

It also presented Amadou & Mariam with fresh opportunities to tour the globe. They went from playing WOMAD to appearing at Coachella and Lollapalooza festivals in the US. They also performed at the opening ceremony of the World Cup in Germany 2006.

In 2008, they released Welcome to Mali to rave reviews. This time, new collaborators came on board: Somalian rapper K’Naan, Keziah Jones, Mathieu Chedid and Damon Albarn who also took them on tour with his Africa Express project and asked them to support his band Blur during their huge Hyde Park comeback concert.

Amadou and Mariam have spent the last few years playing the world’s biggest venues, be it performing alongside Pink Floyd’s David Gilmour at a benefit concert or opening for two of rock’s biggest stadium-fillers: Coldplay and U2!

They will be in Byblos this summer for a wild night of singing and dancing that will leave you breathless. The perfect blend of catchy pop tunes.