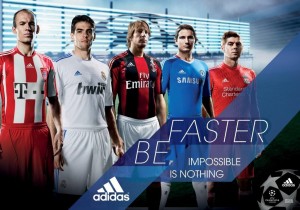 The brand new Chelsea FC shirt takes inspiration from the club’s past jerseys and boasts a red collar and trim as tribute to the historic English Chelsea Pensioners. To launch the kit adidas and the club have collaborated on a mega communications campaign ‘Made from 100% Chelsea’, developed by pop artist and Chelsea fan Sir Peter Blake in celebration of the club’s heritage.

adidas have also designed Bayern Munich’s new kit, inspired by the team’s shirt of 1910 featuring the club’s classic red and white stripes. The jersey incorporates TechFITPowerWEB technology, providing players with the support and confidence to perform at their very best.

The new Club kits of matching shorts and jerseys by adidas are now available at select adidas outlets across the region priced at USD 80.