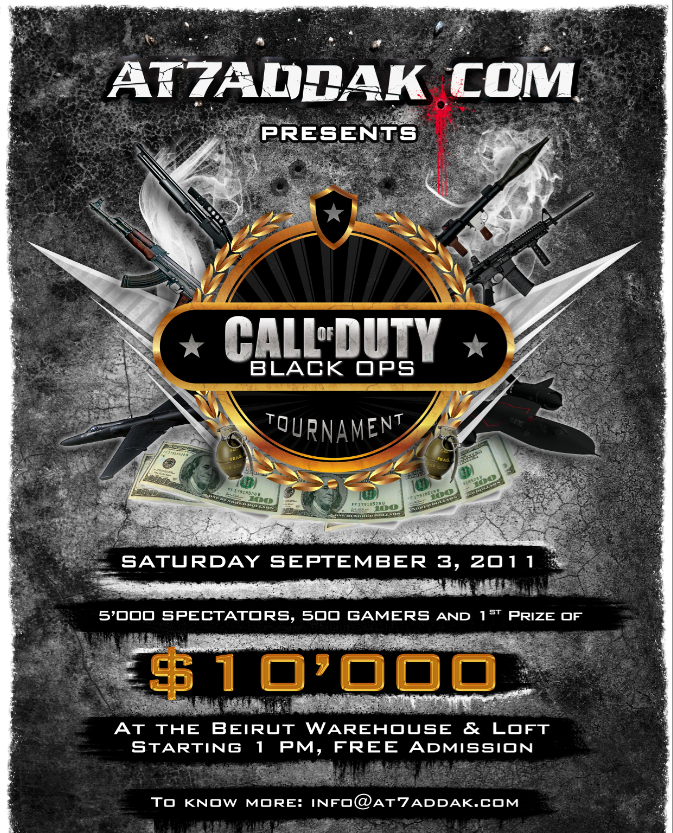 The whole idea started when Brahms Chouity, serial entrepreneur, running 6 different companies, found out his wife was pregnant and decided to take a few years off. He spent the first few weeks of his sabbatical doing what he likes best, console gaming.  The first week went by without much objection from his wife, the second, not so much. On the third, she blasted: “If you don’t make a business out of these video games, then one of you is out of the house”.

That was all he needed to quit his early retirement and go back to what he does best. He wanted to create an online community where gamers could challenge each other virtually, for cash and prizes. A kind of Facebook for gamers. He pitched his idea to his best friend and business partner Prince Abdulaziz Al Faisal, and the two went to work building the concept and the team needed to develop the website.

Fast forward 6 months, and At7addak.com is about to host its very first real-life tournament.

At7addak.com is the Arab World’s most exciting competitive gaming website that allows players from all over the world to challenge each other on their favorite video game titles for cash and prizes.  At7addak.com is an original concept which was created by gamers, for gamers. It is the brainchild of Brahms Chouity (CEO) and HRH Abdulaziz bin Turki Al Faisal (Chairman).

At7addak.com is a multi-platform online competitive gaming website, where gamers can compete in head-to-head and team action using their existing gaming platforms (such as consoles, PC’s, mobile devices…). Our vision is to provide the online gaming community with a more exciting way of meeting up and competing. Here’s how it works:

* They can then challenge each other (either in head-to-head or in multi-player mode) at any of the different games offered on our website.

* The more they play, the more experience points and awards they receive.

* Every season, At7addak.com will host a series of online tournaments, by country and by game title. Gamers with enough experience points will be able to enter these tournaments. Throughout the season, gamers will battle it out against each other, moving up and down the leadership ladder as they win and lose.

* At the end of the online season, the top gamers from each country will then qualify to enter the ‘Country Championship Finals’. These are REAL-LIFE events that we will organize for every country. Gamers will finally meet each other face to face and see what they are really made of, in a tensely competitive environment.

We want At7addak.com to become a home for casual and professional gamers, where they can compete in a safe and friendly environment, and showcase both their individual skill and their ability to function coherently as a member of a team. We also want to give millions of aspiring players around the region an opportunity to compete and improve their skills, while socializing through our thriving online community and live championship events.

Ultimately, we want At7addak.com to become the largest professional video game league in the Arab world. We also want to be the dominant media property exclusively targeting the millions consumers in the region who have a passion for playing video games as a competitive social activity, while giving sponsoring brands access to this highly influential demographic.