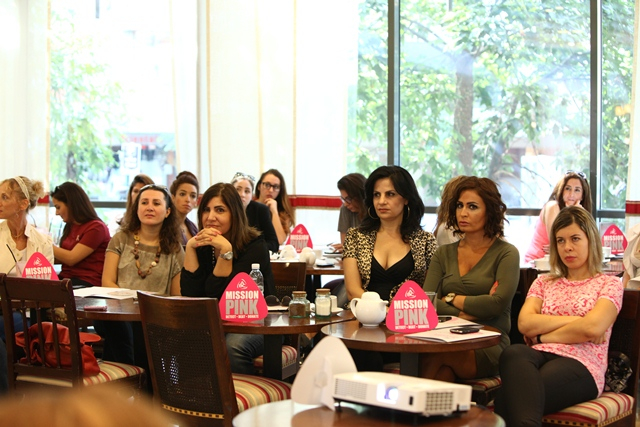 Following the success of its last year’s breast cancer awareness campaign, ABC launched its 2012 ‘Mission Pink’ in support of cancer patients in Lebanon to strengthen the campaign core message: Detect. Beat. Donate. This October, ABC has partnered with Faire Face and May Jallad Foundation to draw attention, heighten awareness and raise funds in the fight against breast cancer.

Throughout the month of October, women, survivors and others also affected by breast cancer will have a chance to acknowledge Breast Cancer Awareness month, and look good while doing good with commemorative pink products, including fashion bracelets and accessories, home merchandise and cookies.

“ABC has a long-standing commitment to giving back and supporting causes that are important to the Lebanese community we live in,” said Diala Kassem, Marketing Manager at ABC. “80% of ABC customers are women, thus this campaign is an important milestone for us to make a significant difference in the lives of women who need support in their battle with cancer. We know that the small part we play in such a monumental cause will make a difference and help save lives and end breast cancer forever.”

Throughout the campaign, ABC visitors will get the chance to contribute to the cause by buying special pink items from the pink corners installed in both ABC Achrafieh and Dbayeh. Retailing for 2% of the purchase price of any pinked tagged item and 2% of ABC pink card will be donated to the campaign while the restaurants in both Dbayeh and Ashrafieh will donate 1$ from each check.

“Through the generous donations from ABC, we will be able to keep up with the free mammography program that was initiated in 1998 for women who cannot attend to a mammogram on yearly basis to make them aware of the importance of early detection of breast cancer”, explained Anne Franjieh, president of Faire Face for Cancer.

“We can really make a difference in the lives of patients who need our help to obtain vital treatment. The donations collected from this campaign will immensely contribute to improving the quality of life of cancer patients who would otherwise continue to suffer in the absence of treatment,” commented Rima Dandashi, president of the May Jallad Foundation for Cancer.

ABC will be also spreading breast cancer awareness through Breast Self-Examination posters hung inside all ladies restrooms. Several awareness sessions for ABC employees will be also organized as well as free of charge mammography offered to all staff aging 40 and above.

Check out ABC “Pink Shop” in Achrafieh and Dbayeh to select from a variety of items in fashion, accessories, home and cookies that give the opportunity to make a contribution in the fight against breast cancer and stay tuned to ABC Facebook page to follow the latest news of the campaign.