A Second Justin Bieber Concert Announced in Dubai on May 5th 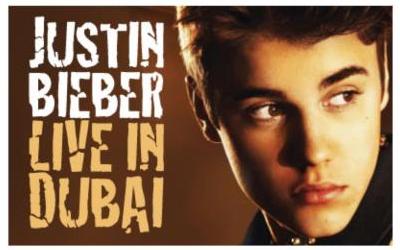 Due to overwhelming demand and with thousands of regional Justin Bieber fans still believed to be looking to lay their hands on Justin Bieber concert tickets when the first Dubai show sold out-Done Events is proud to announce that Justin Bieber will now perform a second Dubai show on May 5th.

Tickets for the new Dubai show May 5th. will go on sale immediately from www.justinbieberdubai.com and all usual ticket sites and starts at AED 350.

Based on the rapid sell out of the premium categories when the first show went on sale Done Events urge fans to now get their tickets as there will be no more regional shows put on sale on this tour.

“As if selling out the biggest concert ever to be staged in Dubai wasn’t enough the Beliebers just won’t let us off the hook” says COO Done Events Thomas Ovesen “adding a second show to his first ever Middle East visit gives Justin Bieber and our team another great opportunity to accommodate the huge demand from Middle East fans wanting to see the show and so we are very excited that Justin Bieber has agreed to extend his Dubai stay by another day to help fulfill the dreams of more regional fans.”

HE Laila Suhail, CEO of Dubai Events and Promotions Establishment, said “2013 has begun with a series of high profile acts performing in Dubai. Adding a second Justin Bieber concert is further demonstration of our reputation as a leading events destination and of the thirst in the region for such performances. As a city we will continue to seek to satisfy this thirst and to increase Dubai’s inclusion on the world tour schedule of major artists.”

In the coming weeks details concerning the event for all ticket holders will be made available on www.justinbieberdubai.com and via regular updates in local media. Enjoy The Show!!