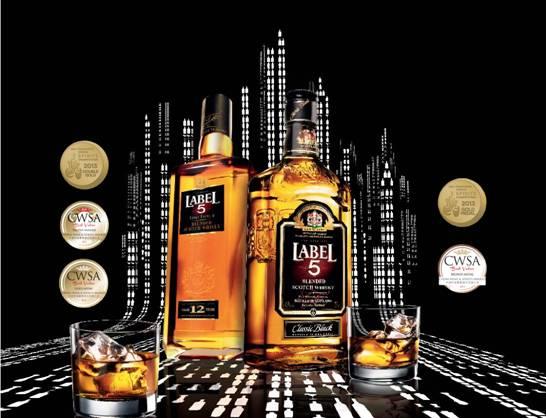 The year 2013 was a success from the start for Label 5, one of the finest Scotch whiskies in the world. During the first half of the year, Label 5 received five global awards for two of its products: Label 5 Classic Black and Label 5 Extra Premium 12.

Label 5 Classic Black, the distinct scotch carefully elaborated from a selection of the finest malt and grain whiskies, won the Gold Medal in San Francisco’s World Spirits Competition of 2013 in the United States, surpassing other known whisky competitors. This Competition is one of the most prestigious whisky competitions worldwide. Classic Black also won the bronze medal in China Wine and Spirits Best Value Awards 2013, the largest and most important competition in China and the only one in the world that evaluates the performance of spirits.

On the other hand, Label 5 Extra Premium 12, the exceptional scotch fully matured in oak casks for over 12 years, won a double Gold Medal, the highest medal earned by Label 5 in the San Francisco competition. This award is the ultimate expression of the world class quality of this Scotch produced at the heart of Scotland. In the Chinese competition however, Label 5 Extra Premium 12 was awarded the Gold Medal and carried on with its successes with the Scotch Whisky Trophy, the highest recognition of the product that earns the highest score considering the number of medals collected by the factory.

These successes only highlight Label 5 Whisky’s commitment to providing excellence as it promises further success in 2013 and beyond.