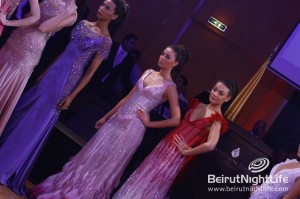 The Community Council of the Syriac Orthodox Archdiocese of Beirut recently organized their first annual charity dinner to mark the 80th anniversary of the consecration of the Cathedral of Saint Peter and Paul in Msaitbeh. The event was at the Four Seasons Hotel in Ain el Mreisseh.

The event included a show with the latest creations from the fall-winter collection of fashion designer Hanna Touma and continued with the award ceremony in honor of Edmond Moutran and Joseph Abdel Ahad. The melodious voice of Aline Lahoud enchanted the crowd, taking them back into the past, before handing over to presenter Ricardo Karam, who drew lots of valuable prizes for the winners. The star of the evening was the exceptional performance made by the violinist Jihad Akl.