The 10 Most Weird Sports in the World

Several sports have been categorized as violent sports such as Rugby, Kick-Boxing and or Elephant Soccer!! But the below list comes in a totally different category “THE BIZARRE”.. Check out the top 10 Weird Sports in the world. 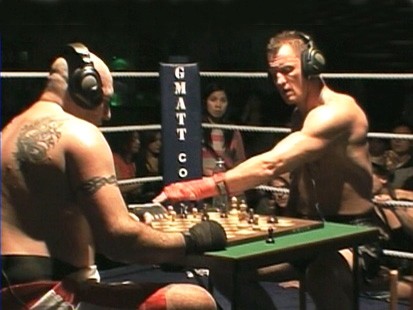 1. Chess Boxing: you’ll need either a check-mate or a FINISH HIM!!

Combining both intellect and physical prowess is the wonderful world of chess boxing. If you can afford the price of a pair of boxing gloves and the expenditure of a few brain cells, then this is the sport for you. The game, brainchild of Dutch participant Iepe the Joker, consists of six rounds of chess interspersed with five bouts in the ring. Contestants can win either on the board or between the ropes, with either a check-mate or a knockout being the most convincing of victories. However, should the referee deem it necessary, he or she can prematurely finish a bout. Should a participant take too long to move a chess piece due to unconsciousness, for example, the match is similarly ended. In the event of a stalemate, the one with the highest boxing score wins. It is indeed a unique blend of intellectual keenness with physical skill, though veterans of the sport may find one of the two increasingly difficult after a while. 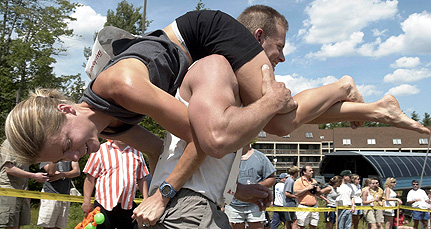 The Finns have the great honour of holding the annual Wife Carrying WorldChampionships. What you do is simply grab a hold of your significant other, and carry her (or him) to the finish line faster than the other competitors. The games are hosted in the small town of Sonkajärvi in upper Savo, in the eastern part of Finland. The rules say nothing at all about the weight of the wife, only that she can be yours as well as somebody else’s. The Wife Carrying World Championships website explains the rules further and has an official entry form. The site also says that this year’s World Champions were a couple from Estonia and that the Estonians actually swept the board, leaving no medals at all for the poor Finns.

I guess it is easier to get a divorce than back pain. 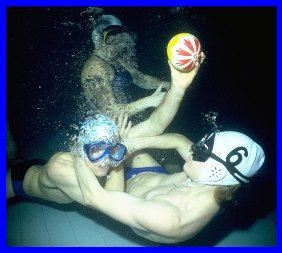 The game of underwater rugby is played in a swimming pool of approximately 4m depth. Two teams of 11 players aim to make a goal by getting the weighted ball in the opposing team’s basket. Each basket is at the bottom of the pool. This is quite an exciting game as normal gravitational rules do not apply to any of the manoeuvres or tactics you might instinctively seek to employ. 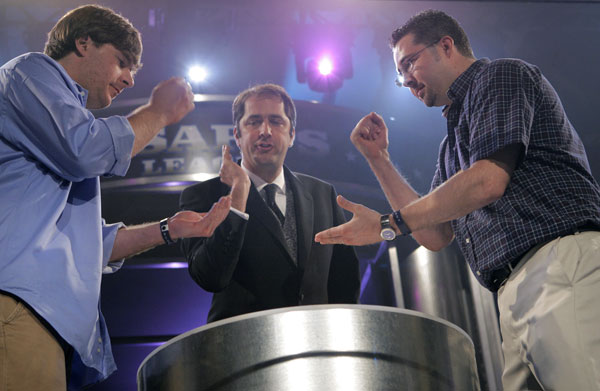 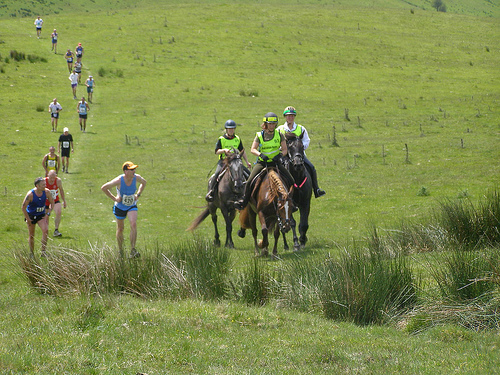 In Wales there’s a famous race called the Man Versus Horse Marathon. A cross country course is laid out, and human competitors pit their stamina against that of a posse of chosen horses. The course is 22 miles long with many natural obstacles to overcome. The steep slopes are a great test of the endurance of both man and beast, and the tricky forestry, which a man may dart through but which a horse can only travel around, is equally difficult terrain. The ultimate aim is to run the course and beat the first horse. This was recently done for the first time by a marine who had been training especially for the event. He won a large cash prize – a prize that’s been getting bigger every year. 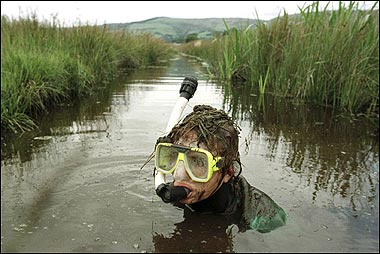 Competitors must snorkel through dirty, smelly mud water for two lengths of a 60 yard trench that has been cut through a peat bog. The snorkeler with the lowest completion time wins. Competitors wear snorkels and flippers (wet suits are optional) and cannot use conventional swimming strokes. The world record time of 1min 35sec is held by Phillip John. The 2007 Bog Snorkelingchampionships will take place on August 27 in the small town of Llanwrtyd Wells in Wales. 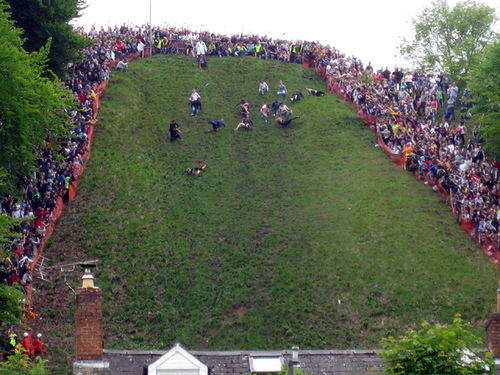 Also known as Cheese Rolling, this dangerous sporting event that takes place every May 22 in Gloucester, England on Cooper’s Hill. The event is said to be at least hundreds of years old. A wheel of cheese weighing about eight pounds is rolled down a very steep hill, and dozens of contestants go scrambling after it so hard and fast that broken limbs and other injuries are common. Whoever nabs the cheese is the champion and they win 15 or so minutes of fame (and the cheese.) 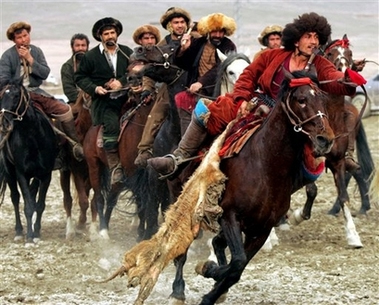 The national sport of Afghanistan and Kyrgyzstan, buzkashi might take the goat for most bizarre sport of all. It is similar to polo in that players on two teams sit atop horses, they are trying to move an object toward and into their goal, and the game can get pretty rough. However, those who play buzkashi do not use mallets, nor do they use a ball; instead, they use a dead calf or goat whose head has been cut off. The players grab the dead headless calf or goat, pass it off to other players, and try to score by getting it in their goal. Serious buzkashi players train intensively for years, and many of the masters over forty years old. 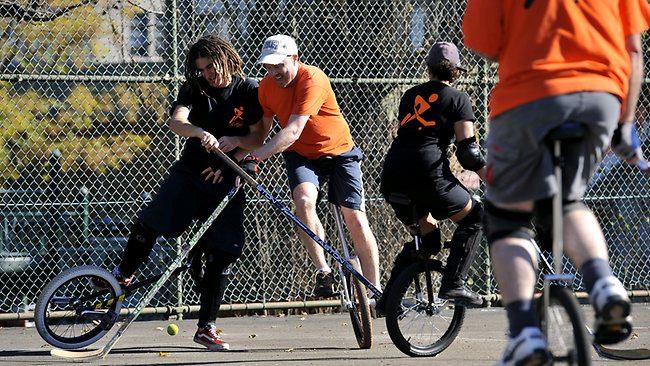 Sometimes, games involving large, toothless Canadians armed with wooden sticks can seem a bit too easy. So how do you make ice hockey more difficult? Play it on unicycles! Following the same basic rules as ice hockey, “uni-hockey” enjoyed scattered success for nearly 25 years in America, Europe, and Asia. Leagues even formed in Germany and Great Britain. Then the new millennium arrived, complete with plenty of flashing lights and pretty zeroes. Distracted by all the excitement, the few remaining enthusiasts climbed aboard their one-wheel chariots and rode off into the sunset. 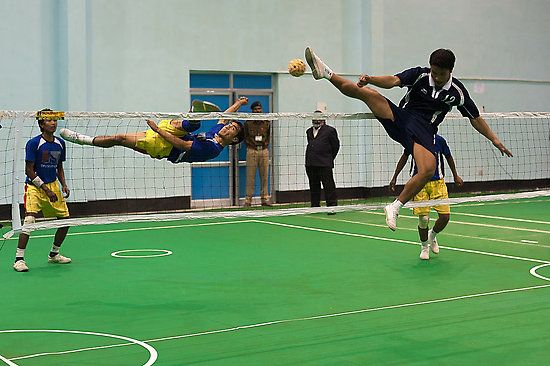 A popular sport in Malaysia and elsewhere in Asia, this one is not bizarre for weirdness as much as for the sheer athleticism involved – the athletic skills required might put even Messi and Ronaldo both to shame. Sepak Takraw resembles soccer, volleyball and gymnastics all in one game. The Takraw ball is about the size of a 16” softball and usually made of rattan or hard plastic stems. There are three players per team, and players stand on opposing sides of a net and use their feet, knees, shoulders or head to hit – actually smash is a more appropriate term – to the opposite side. No hands or arms are allowed. It is common to see players front-flipping, back-flipping and moving their bodies in other impossible ways to hit the ball and score points.

Now you tell us, have you heard of some weird sports?