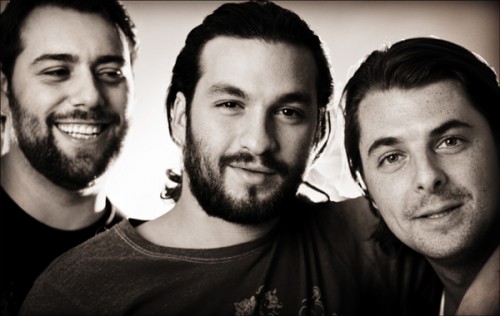 As Axwell said, the creation of the Swedish House Mafia happened when he moved to Stockholm. While he was living there, he accidentally met Sebastian Ingrosso while having drinks, and through him he later met Steve Angello.
“The name is just a random thought. It occurred outside a 7 eleven late at night while drinking coffee.” said Angello.
In 2010, the Swedish House Mafia signed a record contract with EMI and a publishing deal with Universal Music Publishing.

You can hear their new song “Miami 2 ibiza” vs. Tinie Tempah which is a huge hit all over the charts now.

About the group members:

Axwell placed at #10 on the DJ Magazine Top 100 DJ Poll 2010. In late 2004 Axwell released a global hit, “Feel The Vibe”, which was re-released under Ministry of Sound in 2005 with added vocals from Tara McDonald as “Feel The Vibe (‘Til The Morning Comes)”. In the spring of 2006, Axwell and Steve Angello, under the Supermode alias, remixed Bronski Beat’s “Smalltown Boy”, producing “Tell Me Why”. In August 2007, Axwell teamed up with performer Max’C to create the track “I Found U”, which made it to #6 in the UK Singles Chart. Axwell has been producing remixes for other artists – mixes have included Usher’s “Burn” (BMG), Room 5’s “Make Luv” (Positiva), Clipse & Faith Evans “Ma, I Don’t Love Her” (RCA), Stonebridge’s “Put ‘Em High” (Hed Kandi), N*E*R*D’s single “Maybe” (Virgin), and more recently Hard-Fi’s “Hard To Beat”, Deep Dish’s “Dreams”, Pharrell’s “Angel”, Nelly Furtado’s “Promiscuous” and Madonna’s “Jump”.

Steve Angello placed at #14 on the DJ Magazine Top 100 DJ Poll 2010. Steve Angello’s claim to fame came when he released his remix of Eurythmics “Sweet Dreams” in late 2004. Since then he has exploded into the house music scene. In 2007 his eternal club banger, a remix of Robin S “Show Me Love” was released on Data Records. Angello produces under several different aliases. On his own, he has called himself Who’s Who and released tracks called “Not So Dirty” and “Sexy Fuck” as well as Mescal Kid releasing “Magic”, “Do You Want It ?” and the more recent club banger “KNAS”. He often works closely with his childhood friend Sebastian Ingrosso on many projects. Aside from DJing together, they have also produced under the names Buy Now, Fireflies, General Moders, Mode Hookers, Outfunk, and The Sinners.

Sebastian Ingrosso is ranked #16 in 2010 on DJ Mag’s Top 100 DJ list, and won the award for the highest new entry into the chart in 2009, a record beaten only by Deadmau5 into the 2008 Top 100 DJ list at #11. In 2009, Sebastian Ingrosso saw the releases of Laktos, Kidsos, Echo Vibes and Meich (with Dirty South) on his own imprint Refune, “How Soon Is Now” (featuring Julie McKnight with David Guetta and Dirty South) and the vocal stormer House anthem “Leave the World Behind” together with Axwell, Steve Angello and Laidback Luke, with Deborah Cox on vocals. He has co-written and coproduced the track Cupid Boy on the Kylie Minogue album Aphrodite along with Magnus Lidehall, Nick Clow and Luciana Caporaso. Remixed artists during the years include Justin Timberlake, Moby, Röyksopp, Hard-Fi, and Deep Dish.

Newer Post Lebanon in Review 2010 – Out Now
Older PostChristmas Gift Ideas under $100: For Her