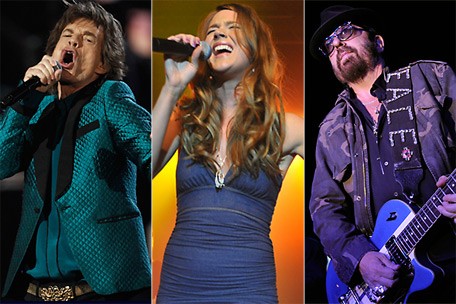 In recent weeks rumors have been circling regarding a new “super group” formed by non-other then Rolling Stones front man Mick Jagger. This week the unexpected collaboration of talented musicians has been confirmed.

Reportedly Mick Jagger (Rolling Stones), Dave Stewart (Eurythmics’), A.R. Rahman (Indian film composer), Joss Stone (Grammy winner) and Damien Marley (three time Grammy winner) have been hiding out in a Los Angeles studio for well over a year recording what will be the debut album for their newly formed super group “Super Heavy”. The full length album, set to be released this September, will be fully loaded with a variety of musical styling’s such as traditional reggae, soft ballads and pristine jam rock.

In an interview with Rolling Stone Magazine Jagger stated he wanted to supply “a different kind of record than what people would expect.” Super Heavy will be the first post Rolling Stones band that Mick Jagger will be a part of. This alone makes the album worth a spin.