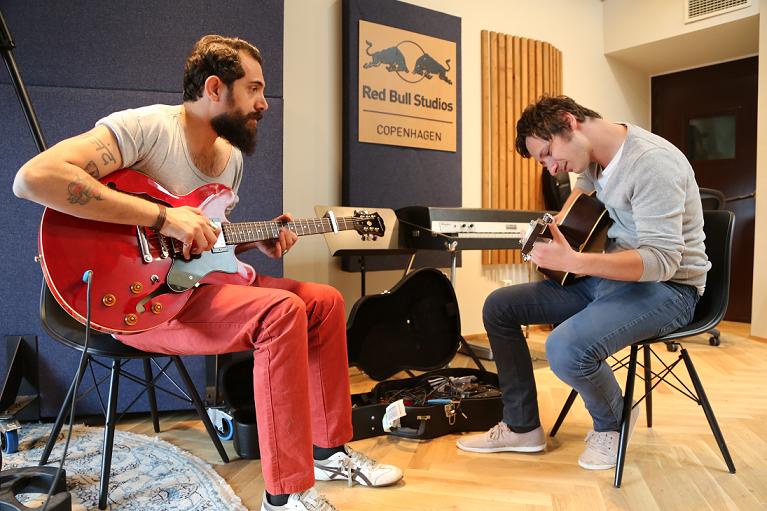 Lebanese blues rock revival band, the Wanton Bishops, who have been reaping a massive hype in Europe, have just returned from a week-long trip in Scandinavia, crowned with special recording at Red Bull Studios in Copenhagen.

The blues duo consisting of Nader Mansour and Eddy Ghossein gave a free open-air concert at Stockholm’s landmark Lydmar Hotel, in front of a feverish audience made up of fans and passers-by. The crowd lay their bicycles down on the sidewalk to catch the show, taking place under the 10pm sun by the city’s beautiful waterfront.

After Stockholm, the band travelled onwards to Copenhagen, where the world-famous Roskilde Music Festival was taking place. The city was overrun with musicians, with bands like Metallica, Kraftwerk, Queens of the Stone Age and Black Rebel Motorcycle Club in town for the festival. It was a great environment for the Wanton Bishops to record some new tracks at Red Bull Studios Copenhagen, housed in the Sankt Petri Passage in central the historic Latin Quarter of the city.

Joined by their French-Lebanese drummer Anthony Abi Nader, and Danish bassist Assi Roar, the duo recorded three new tracks they have been working on while touring through Europe. They also recorded a track with Swedish Grammy Award-winning singer and songwriter Moneybrother, who flew into town to collaborate with the Lebanese band.

Returning to Lebanon days before celebrating their one year anniversary in front of a sell-out crowd of 7,000, to open for pop icon Lana Del Rey in her recent show in Byblos, the Wanton Bishops intend to digitally release the tracks they recorded at Red Bull Studios Copenhagen to their fans on social media, before working on a full second album.