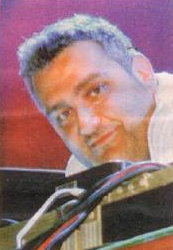 This Lebanese DJ worked on the remix of Shakira’s latest album, She Wolf OK! Middle East caught up with him during one of his whistlestop visits to Dubai.

Have you found Shakira to be inspirational as a musician?
Definitely. Shakira has Middle Eastern roots, which I strongly relate to. She’s also very creative, and an excellent dancer. She’s an inspiration for a lot of people.

Has it been a longstanding ambition of yours to work with a big star like Shakira?
Of Course – it’s every DJ’s dream to work on the songs of such a great artist. I’ve previously worked on one of Ricky’s Martin’s songs, but it wasn’t as big as this one.

What was the first song you ever mixed?
1001 Nights by Mohamad Abdel Wahab.

Who else inspires you?
My wife first all, and all the great musicians and singers like Abdel Halim, Fairuz, Melhem Barakat, Madonna, Michael Jackson, Nina Simone, and of course the great DJs like Carl Cox and Paul Oakenfol.

What was your first ever live gig and were you nervous?
I can’t recall exactly when my first live gig was, but I’ve been doing this for the 19 years! However I was definitely nervous during my first few times.

What’s your next project?
My seventh album, which is due to be released next year. I’ve started working on it but am afraid I can’t say much because it’s a surprise.

Who do you think is the most exciting up-and-coming producer/DJ?
Wolfgang Gartner

When you’re not working, what kind of music do you listen to?
Jazz and Blues.

Name five songs on your iPOD!
Musicology by Prince, Child in Time by Deep Purple, Celbration by Kool and the Gang, Frozen by Madonna and Mel by Alf Laila

What is the best mix album of all time?
Most of the buddha Bar compilations stand out as all-time favorites for me.