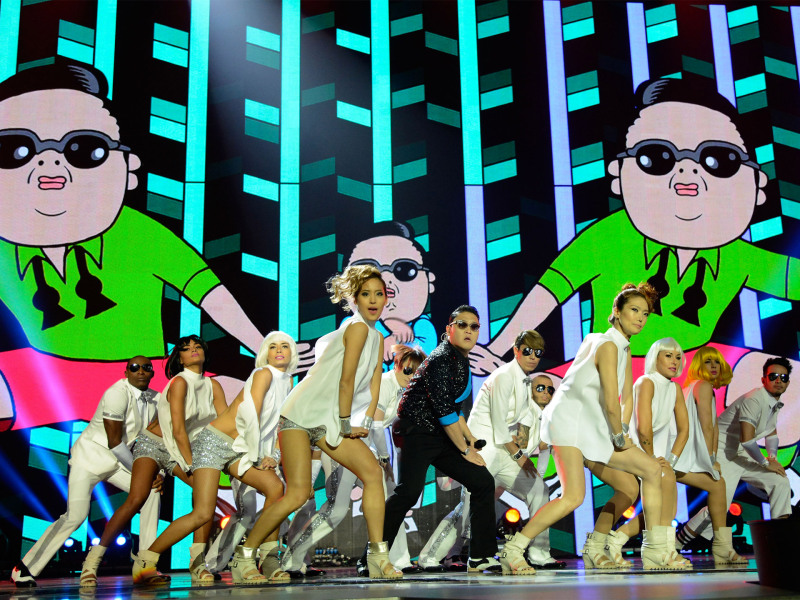 As South Korean rapper Psy readies what he hopes will be his next hit song, aiming for a repeat of the viral “Gangnam Style”, retailers are keeping a close eye on what he wears, hoping another blockbuster will send sales surging.

From the tortoiseshell sunglasses to the two-toned Oxfords the chubby singer sported for his YouTube megahit, a wide range of brands – and Seoul’s Gangnam district itself – have reaped rich rewards from the Psy effect.

Psy’s stylist will say only that the 35-year-old will once more be clad in a suit for the new song, whose title also remains a secret. It will be released at an April 13 concert.

“The basic concept for his upcoming song is again a formal suit but with a humorous twist. I plan to add an unexpected twist of fun,” Hong Hye-won told Reuters in an interview.

“I made a point with a bow tie back in the Gangnam look. There is something like that for the new song.”

Psy’s slicked hair and tuxedo jacket, in a broad range of electric colors, paired with a pleated white dress shirt and a black bow tie, run counter to the carefully manicured and primped young women and men typical of the K-Pop industry.

Much of what Psy wears is from his personal closet, since it is hard for him to find a suit that fits, Hong was quoted in a local newspaper as saying last year.

Both the Vivienne Westwood white shirt and the Thierry Lasry sunglasses he sports in the video, which made YouTube history by being the first to gain more than 1 billion views, are items he bought for himself some time ago, she was quoted as saying.

French eyewear designer Thierry Lasry has been besieged with questions about the two kinds of shades – the tortoiseshell, and black with gold temples, both called “The Variety”.

“We have had a lot of requests from our customers who saw and loved his music video,” said Clara Mercier, marketing manager for Thierry Lasry, who said the tortoiseshell version was a limited edition. The black ones go for 335 euros ($430).

“We obviously could have sold thousands had it not been a limited edition,” Mercier added.

NOT SO TALL, NOT SO HANDSOME

Gabor, a German-based shoe maker, has also benefited. Psy’s footwear was actually Christian Louboutin, but similar enough to one of Gabor’s styles to send Korean sales shooting up 100 percent in September 2012 from a year before.

“Before Psy, Oxfords were not exactly popular,” said Lee Hyung-joo, Gabor marketing manager. “But now everyone, man or woman, old or young, fashionable or not, wants to try the Oxfords Psy wears.”

Psy’s broad appeal appears to be the key. The YouTube video has now been viewed more than 1.4 billion times.

“He is not a typical model type of person – quite chubby, not so tall and not so handsome. But it does not matter,” said shoe designer Jimmy Choo, in Seoul for a recent awards ceremony. “We feel he is like us, like the guy next door.”

Gangnam, the upmarket Seoul suburb that has become a byword for affluence and consumption if not always good taste, has also seen a spillover effect that has kept its streets crowded – and the cash tills of its high-end stores ringing.

Tourist numbers have shot up 50 percent to 320,000 in January this year, compared with the same period in 2012, according to government data. Chinese tourists stand out although locals also spend more time in the area, especially Garosil-gil, the trendiest part.

“We think that Psy has brought ‘Gangnam’ closer to ordinary people, who were often uncomfortable with its luxurious, well-to-do image,” said Jeong You-sook, an official at the Tourism Promotion Division of the Gangnam District office.

“Everyone, including myself, wants to try not just his dance moves but his fashion and his hairdo. Just like everyone was going as Elvis Presley and Michael Jackson in their heydays,” he said.