Psy Is No ‘Gentleman’ In New Music Video 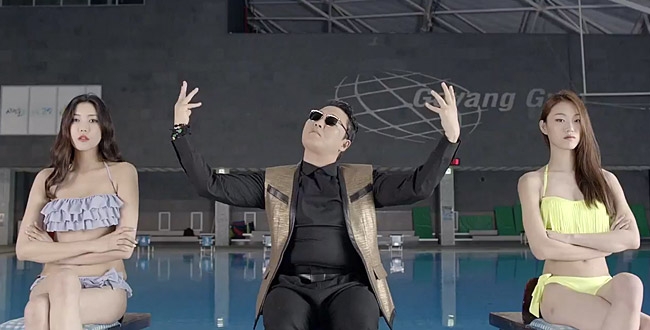 In the four-minute clip for his new single, which debuted Saturday (April 13), Psy parades through a series of chic restaurants and shops, playing pranks on female companions eager to join his entourage.

The song’s throbbing electro beat immediately recalls the irresistible catchiness of “Gangnam Style,” but Psy’s performance only showcases how much sillier he’s become in the wake of his emergence as a worldwide phenomenon. Evidently he’s so rich now he can afford to get his tongue surgically embedded in his cheek. Although he expands upon the garish lifestyle he chronicled in the YouTube-record-breaking clip for its predecessor, “Gentleman” effectively parodies a rich heel, subjecting ladies within his celebrity orbit to “Billy Madison”-style gags like pulling chairs out from beneath them and speeding up treadmills until they fall off.

Although stink-palming a girl in a library ranks among the video’s best moments, his “performance” of an (admittedly unclear) English language lyric is the one we love best: As he says either “Wet Psy!” or “West Side” (and we hope it’s the former), Psy and two bikini-clad women are catapulted into a swimming pool. Meanwhile, he gleefully terrorizes a kids’ soccer game and holds up an unfortunate elevator passenger who desperately needs to pee before meeting his match — a buxom gym rat who gives him a taste of his own medicine.

One-hit wonder or not, Psy is clearly savvy enough to take advantage of his 15 minutes of fame, even if he doesn’t seem to take it too seriously. Even before the video cuts to behind-the-scenes footage of Psy laughing his way through its goofiest moments, he simultaneously satirizes superstardom and attempts to enhance his own, aiming to re-create “Gangnam Style” magic with a new dance routine. Will it work? I guess we’ll know when Matt Lauer starts doing it on the “Today” show.