Two things rock fans in Lebanon were waiting for happened on July 29th 2011. The first was Mashrou’ Leila’s E.P. release launch concert at the Beirut Hippodrome and the second the release and availability of the new E.P. El Hal Romancy. As I walked into the Hippodrome a promo model that was handing out free cigarettes, from sponsor Winston, greeted me. Freebee’s upon entrance is always a plus! Merchandise booths were set up by companies including Ashekman Urbanwear, Timeout Beirut, the Lebanese Lotto, Mashrou’ Leila and of course Beirut Night Life. A Beer garden and a fully stocked Vodka bar was set up by sponsor Eristoff. 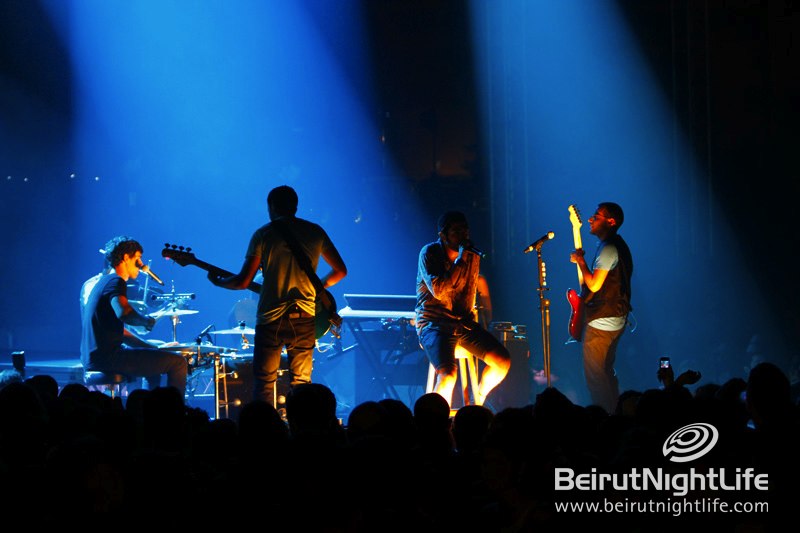 Mashrou’ Leila hit the stage and started directly playing their first song, the dark and eery sounding “Hajez”. The violin played by Haig Papazian backed by a string section, the band brought along specifically for this event, really shined through. The second song “Imm El Jacket” was dedicated to the recently incarcerated Zeid Hamdan. Vocalist Hamed Sinno humbly exclaimed to the audience that the band was playing specifically for them and went straight into the next song, the soft and instrumental, “Fassteen”. Hamed Sinno also graciously thanked the fans after every song. The audience was pleased to hear songs off the new E.P. including “El Hal Romancy”. During said song the singers voice was so powerful, hitting impressive high notes. Political sound clips introduced the psychedelic sounding “Taboor”. 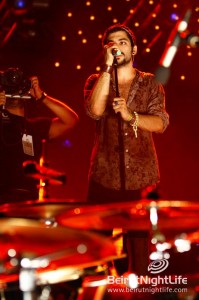 The band took a short break but only to move themselves from the stage closer to the crowd. Surprising their fans by playing the next few songs in an intimate unplugged style atmosphere. “Abtak Safra” started. The jazzy feel gave the vibe of a traveling band playing for pedestrians on a busy European street. The keyboards (Omaya Malaeb) shined, the acoustic guitar (Andre Chedid) complimented the songs perfectly, while the electric rhythm guitar (Firas Abu-Fakhr) and bass (Ibrahim Badr) added power to the soft tunes. Drummer (Carl Gerges) brought the sound together with his jazzy backbeats. Mashrou’ Leila played a song written specially for this event. The song was so fresh it had yet to be completed or named. Perhaps something special about the show will provide inspiration for a song title.

The show continued with Hamed Sinno center stage chanting from deep within his soul the lyrics to “Obwa”.
Pyrotechnics lit up the stage for the song “Raksit Leila”. Hamed Sinno displayed the sensuality behind this song with sexy hip shaking. The movements came right in time for an upbeat tune. Fans of the band Gorillaz’ enjoyed “Ghadan yawmon afdal” a song inspired by Gorillaz’ hit “Clint Eastwood”.

Hamed Sinno jumped into the crowd for “Imbembelilah”. Then the last song “Keef bit bee3ni lal roman” had singer shouting “3alehoum”.  Smoke machines fired up into the sky marking the end of an incredible set put on by the extremely talented Mashrou’ Leila.

Wait, Fans didn’t have enough! They started cheering in hopes of an encore. The band surely wouldn’t let their fans down so came out clapping while Hamed Sinno mimicked voices of gossiping Lebanese women to introduce the encore song “Latlit”.
Mashrou’ Leila said Thank You to their fans and waved a goodnight.

JADE’S set up was quickly carried onto the stage and the DJ who needs no introduction arrived. His electronic mixes are like no other. Adding to his style for tonight he included Mashrou’ Leila songs into his set. Mixing commercial with non-commercial is JADE’S unique way of pleasing everyone in the audience.

For this show I do want to mention and commend the lighting director from Sultan for an amazing show as well as the sound engineer for his solid work.

For those of you who missed the show here is the set list of songs played throughout the evening: