Ferry Corsten Gig of 2009 “Twice in a Blue Moon: The Experience” 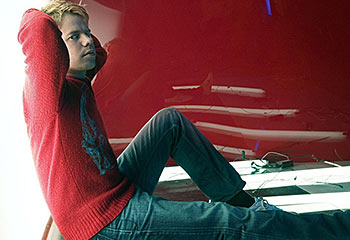 It’s hard to believe that exactly a decade has passed since Ferry Corsten put the sound of Dutch trance on the global dance map pretty much single-handedly. Back in 1999 the unstoppable euphoria of Corsten’s tracks as System F, Gouryella and Verracocha exploded out of nowhere to become the anthems of their day, conquering floors from England to Ibiza and storming into the UK’s national charts in the process.

Even a good slice of today’s dyed-in-the-wool techno fiends can probably recall juvenile days losing it to tracks like ‘Out Of The Blue’ and ‘Carte Blanche’.

Yet ten years on and Corsten is still dedicated to pushing the trance sound forward for the next generation and reckons the genre is the healthiest it’s been for years.

“It’s such a blend of different styles these days, it’s hard to even call it trance sometimes,” believes Corsten, who has turned his hand to everything from house and progressive to drum & bass and gabba in his extensive production career.

“I can start with a 128 bpm track that someone might call minimal techno and then go all the way right through to 140 bpm hands-in-the-air trance with everything in between – house, techno and electro. The diversity in the genre right now really gives you a lot of space to manoeuvre as a DJ.”

Corsten was the dominant force in creating that diversity when he charged against the grain to lay down the electro-spiked clarion call of ‘Punk’ back in 2005. And he’s been cutting a new path yet again this year through the debut of his ‘Twice In A Blue Moon: The Experience’ concerts.

“I play all the tracks, including the slower ones, from my ‘Twice In A Blue Moon’ album with tailormade visuals and then we have live vocalists performing, like Betsie Larkin,” explains Corsten. “It’s the next stage for me as an artist.”

Following a strong debut showing in Kuala Lumpur, Corsten recently showcased the experience in front of 30,000 revellers as part of LA’s Nocturnal Wonderland festival with a slew of shows slated for the Middle East, Brazil and Eastern Europe across autumn and winter.

DJ-wise, Corsten continues to fly his flag as one of the most popular proponents of trance’s soaring sonic sugar rush with a diary that has taken in gigs everywhere from Ibiza to further flung locales like Toyko, Toronto and Rio De Janeiro. In fact, name a city and the chances are Corsten has DJed there this year. Yet some of his best moments have come in those all too rare appearances closer to home.

“Closing Dance Valley for the first time was a highlight,” he smiles. “It’s the festival that I had been going to as a punter before I started DJing and has been a mainstay in my diary for years so to finally get to close it was another milestone for me.

“Playing the Dance Parade in Eindhoven was also really special,” he adds. “To get to play in my home city is crazy anyway… I’m always playing somewhere else except here! But to have your own float surrounded by 400,000 people was something else.”

For a DJ that has been jet-setting ever since that ’99 explosion, the constant craziness is just business as usual but his recent ‘Backstage DVD’ offered a behind the scenes insight for his many fans.

“I felt it was time to expose a little bit more of the man behind the name,” he lends. “I’ve done a couple of DVDs and it’s always the usual stuff – me behind the decks, shots of large crowds. But we basically started filming right when my wife became pregnant. We show my gig at the Freedom festival in Holland, where I hopped from one city to another, four cities in total, and get in an army helicopter. We go to Brazil and to Lebanon and to some of the big UK festivals. It’s shows both sides of the life. The waiting in airports, being away from the family, missing flights and getting burgers from a stand after a rainy festival in Ireland, to the moments on private jets or sitting in fancy restaurants. It’s a beautiful life, but it’s not all glory… there’s a lot of hard work.”