Events, Interviews, Music, Photo Gallery
BNL
First we wanna welcome U to BeirutNightlife.com and wish you a prosperous 2006 filled with joy and success. 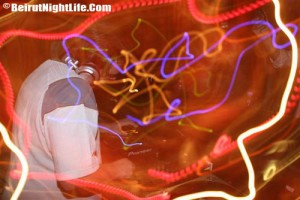 BNL: And now since you’re familiar with our lebanese clubbers, and you already know and witnessed what lebanese clubbing is about, tell us what’s your opinion about the lebanese clubbers who attended your gig?
Fred: Well, I was really happy to see how many clubbers came down to see me.
The crowd was amazing!! I really like the Lebanese clubbers.
Spoke with a few of them…nice people.
You can see that the cord is into this kind of music.

BNL: How did you build up the chemistry between you and them?
Fred: Well…like I use to do everywhere, break the Ice talk with the clubbers before I hit the decks.
It’s important for me to have good contact with the crowd, not only during my set but also before and after.
Unfortunately my flight was leaving early so I got straight to the airport from the gig…
During my set it’s chemistry al over…I feel what the crowd wants and I feed them with quality tracks.
Seems that they enjoyed themselves very much.

BNL: Did B018 have any help in this , and what did you think about the setup?
Fred: I really love the club; a point that needs to be changed is the location of the DJ booth.
It would be better if it was located in the vision of the crowd.
I like to have eye contact during my set; this was a little difficult now.
But the place and the sound and the people who works there are great.
Also big shout to the owner, a very nice person.
For me a great experience.

BNL: If you think of any, what does the Lebanese club scene miss?
Fred: Wouw…that’s difficult for me to say.
I was there for one gig so I hadn’t enough time to investigate.

BNL: And now to get back to You, what are your main projects for 2006?
Fred: Main project are a tour in Australia, USA and Canada.
Working on new projects with different producers Worldwide.
That will be my goal for this year.

BNL: Who were you inspired by as musicians and composers during the time you were brought up?
Mostly the 80’s and DJ’s like Anthony Pappa, Sasha and John Digweed I think.
For the 80’s, George Moroder, Human League, Kraftwerk and Patrick Cowley are heroes for me.
Also composers like Barry Gilbey, Greed, Satoshi Tomiie, Deep Dish and Piece Division.
These are guys who worked hard and are still rocking the floors.

BNL: What are your favorite things about DJing?
Fred: Please the crowd, learn them about new music.
Contact with the people and see how they enjoy themselves.
When the gig is good it’s like to be in heaven….

BNL: What you have you learnt from DJing ?
Fred: Be yourself.
It’s very important to make your own sound.
It’s your sound the people love…stick with it and crow.
Listen to new music and use it when it fit’s in.
It’s new music and new influences in the style you’re playing what keep the scene fresh.

BNL: What do you feel the DJ’s role is in modern society?
Fred: It’s better that years ago, now DJ’s get recognition they deserve.
DJ’s are doing a great job these days; you can read that they are comparable with Artists.
I think it’s true, they work hard (at least the most do).
DJ is a culture … a life style.

BNL: What do you think makes a good DJ?
Fred: Well that’s not that easy to explain.
First of all, play music you like yourself, don’t be a “look a like” DJ who what’s to play records.
DJ is something that comes from your heart; you must have passion for the music.
Than it’s important to play good music, and good music is not only new music, play good old classics at the right time and you will see that it works.
Be open minded about new music, new music is the future.
Eye contact…that is very important, the crowd it there for the music but also for the DJ.
Look them in the eyes and make them smile…give them a hell of a night.
Well simple in words….but not everyone is able to make it happen.

BNL: What was the first record you ever bought?
Fred: Think it was something from Earth Wind and Fire…still love to listen to that music.

BNL: What’s the most extreme thing you’ve ever done to acquire a record?
Fred: Pay way to much money for it….but if you really like something sky is the limit right?!

BNL: What advice would you give to a DJ just starting out?
Fred: Make sure you want to be a DJ because of the Music and not because of being a DJ.
Take your time to learn, talk with other DJ’s and try to learn from them.
Start at small parties to learn your skills.
Play with your hearth; don’t play prepared sets, which you practice at home.
You must play for the crowd so you must be able to switch easily during your set.

BNL: What’s the best advice anyone has given you?
Fred: Believe in yourself and what you’re doing, when it’s good it will pay off.

BNL: Define a great club with the greatest crowd?
Fred: Well I like clubs, which are not too big.
I want to play on the same level as the clubbers.
Need to have good equipment and a good DJ booth.
Lights are very important to, and a good light jock who controls them.
Even a VJ would be nice, love to watch good visuals.
And last…but not least…the crowd, ready to rock the club.
A good mix between boys and girls makes it perfect.

BNL: How does being a DJ affect what you do in the studio?
Fred: A lot, what I see on the floor during my set’s I use in my productions.
You learn each day new things….
During your set’s you see what kind of tracks are hot and which not.
Than it’s important to translate that in your own track.

BNL: How do you go about making great records?
Fred: First of all mostly I have an idea, mainly the melody comes first.
Than I work on the bass line, the bass line is the soul of the track.
Than the rhythm…the rhythm and the arrangement are the most difficult things.
You want to be unique…
A good record must be timeless.
I’m happy that I have a few, which are released a few times…that means that the track is timeless and that the people still enjoying it.

BNL: When you started making dance records, did you have any idea where it would go as a career?
Fred: No not really, I started as DJ and later I decided to produce as well.

BNL: Do you think DJing leads naturally into production?
Fred: Yes I do.

BNL: If (Yes) or (No) , Why ?
Fred: Most of the DJ’s are producers as well, which is good.
Some DJ’s don’t have the patience to produce, they keep it with DJing.

BNL: Do you consider the DJ an artist nowadays?
Fred: Yes, like I wrote before…DJ’s are the new Artists these days.

BNL: Where do you see dance music is going next?
Fred: Kind of more cross over pop, more vocals and influences from other styles.
More mixed up than it was before.

BNL: What do you think about this new Era of CD players taking over?
Fred: Great for me, you can test your production straight from the studio…burn and see how it goes.
Also for promotion, it’s fast and cheep to make….excellent.

BNL: Do you prefer Turntables or Cd players , and Why?
Fred: Rough one:)))
I like both, the CD players are great because of the reasons I wrote before and because of the loops and tricks they have on board.
Vinyl….still play a lot, love to feel the vinyl and see the needle move forward.
Vinyl is more emotional with music than CD..at least for me.
I started with vinyl only so that could be the reason.

BNL: Who are your favorite DJs?
Fred: Anthony Pappa, Hernan Cataneo and Deep Dish to name a few..but there are more…also Barry Gilbey is one of my favorite ones.

BNL: What do you think the legacy of these DJs is?
Fred: The knowledge about music, the skills they have and how the play with, and for, the crowd.

BNL: Do you think they turned records into musical instruments?
Fred: Absolutely, with the CD players you have you own instrument.
Anthony Pappa is really an Artist in using them, he almost remix a song live during his set..amazing!!

BNL: Any last words for the Lebanese clubbers?
Fred: Stay fresh…open minded and listen to much new music as you can.
Big shout to all who where at BO18 during my gig.
Couldn’t wish for a better crowd, really loved it from start till finish.
Hope to be back soon.

Thx for ur Cooperation …