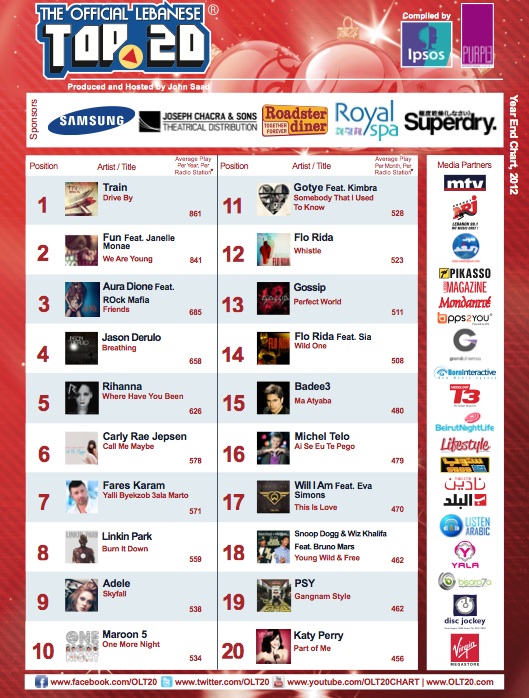 As expected, it is the huge hit “Drive By” from American Rrock band Train which clinches the year’s number one trophy with 861 plays on average per radio station for the calendar year!

Following ”Drive By”, comes “We Are Young” at #2 from Fun featuring Janelle Monae, and “Friends” at #3 from Aura Dione featuring Rock Mafia.

We have to point out that unfortunately only 2 local artists did manage to chart in this year end countdown for the year 2012. It is Fares Karam at #7 with “Yalli Byekzob 3ala Marto”, and Badi3 at #15 with “Ma Atyaba” scoring respectively 572 and 480 plays per year per radio station.

Also present in this OLT20 for the year 2012, we find at #6 “Call Me Maybe” from Canadian singer Carly Ray Jepsen, at #9 the hit of the last few months “Skyfall” from British singer Adele, at #16 “Ai Se Eu Te Pego” from Brazilian singer Michel Telo, at # 19 “Gangnam Style” from Korean sensation Psy, and at #11 “Somebody That I Used to Know” from Australian / Belgium duo Gotye featuring Kimbra. Nothing but Top notch songs!

Very quiet chart action is also expected to continue next week for the 1st Chart of the year 2013.

Newer Post One Heck of a One Night Stand at Playroom!
Older PostKim Kardashian is pregnant!!