BeirutNightLife.com Brings You the Official Lebanese Top 20 the Week of January 6th, 2013! 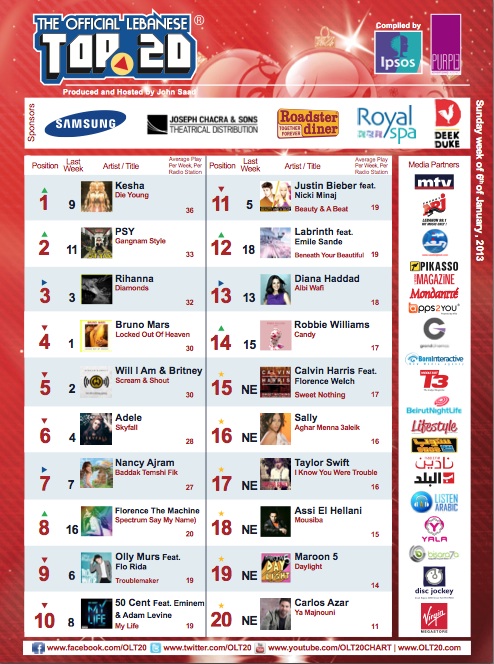 Following the Xmas chart and the last chart of 2012, things are pretty much back to normal this week with the first Official Lebanese Top 20 of the year 2013. As expected, and as strange as it may look, Korean singer Psy goes up again to this week’s Number 2 with “Gangnam Style” following a heavy play of the song on most of the Lebanese radio stations during the festive season.

The first number 1 of the year comes from American recording artist KeSha who returns to the top of the chart with “Die Young” a song lifted from her second album “Warriors”. Nancy Ajram remain at this week’s number 7 with “Baddak Temchi Fik”. Same thing from Diana Haddad also a non-mover this week at number 13 with “Albi Wafi” From the week’s 6 new entries we have“Ya Majnouni” from Carlos Azar at number 20, “Daylight” from Maroon 5 at number 19, “Mousiba” from Assi El Hellani at Number 18, “I knew You were Trouble” from Taylor Swift at number 17, and also “Aghar Menna 3aleik” from Lebanese singer Sally at number 16. Sally was the week’s guest on the Radio edition of OLT20. Finally note that this week we have 5 Lebanese Singers and 15 occidental ones on OLT20