BeirutNightLife.com Brings You the Official Lebanese Top 20 the Week of December 16th, 2012! 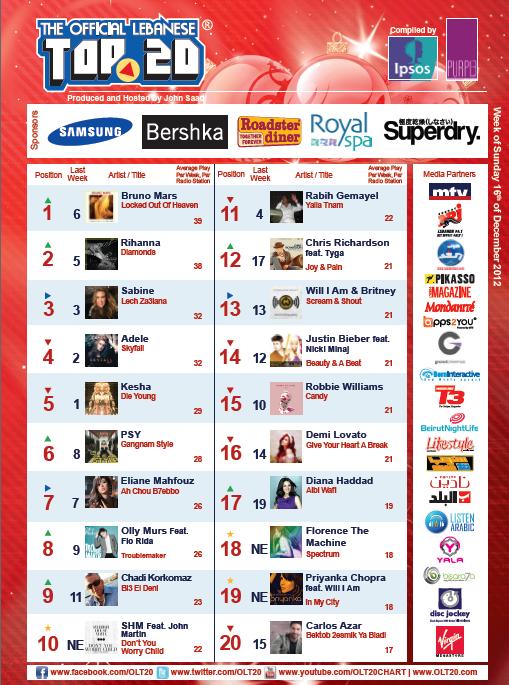 Following the famous 5 weeks of Adele’s ”Skyfall”, and the single week of KeSha’s ”Die Young”, it is now the turn of American singer-songwriter Bruno Mars to have the weeks most played song on Lebanese Radios with ”Locked Out Of Heaven” lifted from his second solo studio Album called ”Unorthodox Jukebox”.

Behind Bruno Mars competition is fierce as Rihanna bounces back to #2 with ”Diamonds”, and Lebanese singer Sabine who was the week’s guest on OLT20’s Radio Show holds to #3 with ”Leich Za3lana”. Let the most added song wins! In todays listings we only have 6 local artists & 14 Occidental ones.

From the New Entries, we have at #10 “Dont you Worry Child” from Swedish band Swedish House Mafia, at #18 ”Spectrum (Say My Name)” from English Edie Rock Band Florence & The Machine, and at #19 “In My City” from Indian actress & recording artist Priyanka Chopra featuring none other than American rapper Will.i.am as a guest vocalist!! Even more chart action is also expected to continue for next week.

Check out the new and complete OLT 20 chart by clicking on www.OLT20.com or via the OLT20 app available for download on all platforms. Finally, note that the OLT 20 can be heard every Sundsy from 6pm on Sawt el Ghad 96.7 FM and every Monday from 7 pm on NRJ Lebanon 99.1 FM. Also it’s played on a daily basis as a compact Top 20 countdown on MTV Lebanon and published weekly.