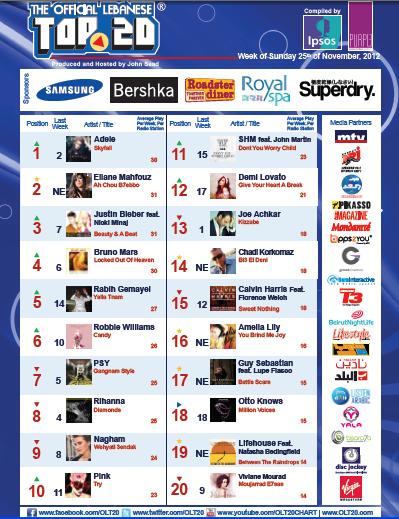 After a week of relative calm, the action returns this week on the Official Lebanese Top 20 with 5 new entries and a big number of climbers. This trend of heavy action is also expected to continue over the next couple of weeks, but  for now in the listings we have only 6 oriental acts and 14 occidental ones. After claiming the #1 position last week with “Kezzabe”, Joe Ashkar drops to #13 and is replaced at the top by Adele, who moves up again to number one with her song “Skyfall”, from the latest Bond Movie of the same name. With her previous 3 weeks on top, Adele now is in her 4th week at #1. Simply massive! Note that “Skyfall” is also currently played by occidental radio stations as well!

From the week’s new entries, the highest one at #2 comes from Lebanese singer Eliane Mahfouz withe her new single “Ah Chou B7ebbo”. Eliane was the weekly guest on the OLT 20 Radio Show last Sunday and her interview is now available on both OLT 20’s Facebook page and OLT 20’s Youtube channel. Other new entries include “You Bring Me Joy” at #16 from British singer Amelia Lily, “Battle Scars” at #17 from Australian recording artist Guy Sebastian and American Rapper Lupe Fiasco, and “Between the Raindrops” at #19 from American rock band Lifehouse, featuring British singer Natasha Bedingfield.

Also note the jump of 9 places of “Yalla Tnam” from Lebanese singer Rabih Gemayel, who’s back into the top 10 at #5. Check out the new and complete OLT 20 chart by clicking on www.OLT20.com or via the OLT20 app available for download on all platforms. Finally, note that the OLT 20 can be heard every Sundsy from 6pm on Sawt el Ghad 96.7 FM and every Monday from 7 pm on NRJ Lebanon 99.1 FM. Also it’s played on a daily basis as a compact  Top 20 countdown on MTV Lebanon and published weekly.