Following the craziness of the last couple of weeks, things have settled down this week on The Official Lebanese Top 20. There are only a couple of new entries and no changes at the top of the chart. Yet the number of oriental acts increases to 7 this week, with now some 13 occidental ones.

The highest new entry “Candy” at #9 comes from the former Take That member British singer-songwriter Robbie Williams. “Candy” is the lead single taken from his ninth studio album Take The Crown. Also new, at #13 is “Yalla Tnam” from Lebanese singer Rabih Gemayel.

It’s also worth noting that after going down to #16 last week, “Ya Ana Ya Ana” from Lebanese singer Layal Abboud bounces back to #5, following its increasing radio airplay across Lebanese radio stations.

Finally a big thank you to Music Producer and singer/songwriter Salim Assaf for being the weekly guest on the OLT20 Radio Show for this week, and for answering all our questions.

Finally, note that OLT20 can be heard every Sunday from 7pm on Sawt El Ghad 96.7FM, and every Monday from 7pm on NRJ Lebanon 99.1FM ! – It is also played on daily basis as a compact Top 20 Countdown on MTV Lebanon, and published weekly via all our 21 Media Partners (Dailies, Weeklies, Monthlies, Online, Outdoor, OLT20 Mobile App, and on Location). 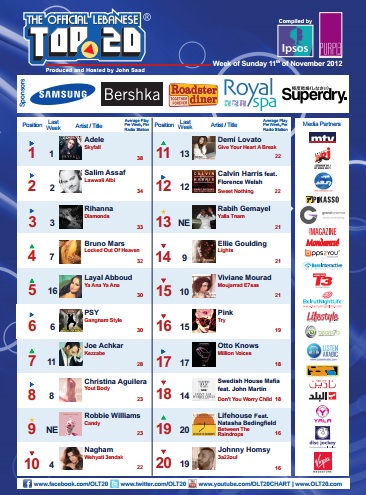