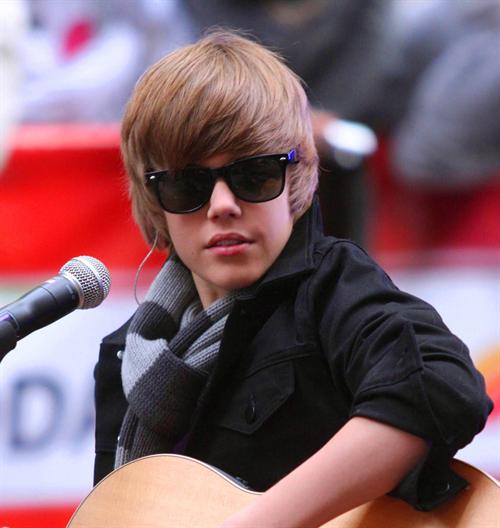 For the week of L-O-V-E, I decided to feature an artist who is one of the youngest heartbreakers on the music scene. I have heard 40 year old women expressing their fondness towards him, and 13 year old girls obsessing about how they wish they could marry him.

Needless of an introduction, Justin Bieber is a Canadian pop-R&B singer who was born on March 1, 1994. Growing up, Bieber enjoyed playing hockey, soccer, and chess; he usually kept his musical ambitions private. He taught himself to play the piano, drums, guitar, and trumpet. When he was 12, he performed Ne-Yo’s “So Sick” during a local singing competition in Stratford, Ontario, and won second place. His mother posted a video of his performance on Youtube for their family and friends to see. She continued to post videos of Bieber covering several R&B songs until he was discovered by Scooter Braun in 2008 after accidentally coming across one of his videos.
Scooter Braun later on became his manager and introduced him to Usher. Bieber was soon signed to Taymond Braun Media Group, a joint venture between Braun and Usher, and got a recording contract with Island Records. His debut single “One Time” charted in the top 30 in many countries. His debut album My World was released later in 2009 and received platinum certification in the US. He became the first artist to have seven songs from a debut album chart on the Billboard Hot 100.His first studio album My World 2.0 was released in March 2010, debuted at number 1 in several countries, and received platinum certification in the US. His world-wide top-ten single “Baby” was ranked most viewed, most discussed, and most disliked Youtube video.
Justin Bieber collaborated with other famous artists and brought us hits like “Somebody to Love” featuring Usher and “Eenie Meenie” featuring Sean Kingston.