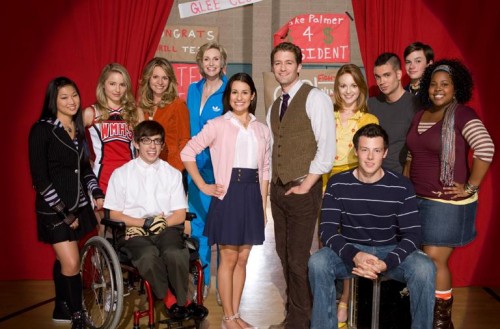 The world has gone Glee-crazy with this hit TV show – not because of the acting, but because of the excellent musical pieces in each episode where the Glee Cast performs their own re-make of classic and contemporary hits.
The show’s musical performances have been a commercial success, with over thirteen million copies of Glee cast single releases purchased digitally, and over five million albums purchased worldwide. In 2009, the Glee cast had 25 singles chart on the Billboard Hot 100, the most by any artist since The Beatles had 31 songs in the chart in 1964. In total, Glee has placed 104 songs on the Hot 100 weekly chart, second only to the 108 entries of Elvis Presley, though fewer than one-fourth have charted for more than one week. The cast performance of “Don’t Stop Believin'” was certified gold in November 2009, achieving over 500,000 digital sales. The series’ cover versions have also had a positive effect on the original recording artists, with sales of Rihanna’s “Take a Bow” increasing by 189 percent after the song was covered in the Glee episode “Showmance”. Their cover of “Forget You” was also credited for making the original song reach a new peak on the Billboard Hot 100 on the same week the Glee cover reached the chart.

In casting Glee, Ryan Murphy (the creator) searched for actors who could deal with the bustle of starring in theatrical roles. He spent three months casting on Broadway, where he found Matthew Morrison (Hairspray and The Light in the Piazza), Lea Michele (Spring Awakening), and Jenna Ushkowitz (The King and I).

When auditioning actors with no previous theatrical experience, they were required to show that they could sing, dance, and act; like Chris Colfer, Jayma Mays, Cory Monteith, Kevin McHale, Jane Lynch. The cast is under contract for three Glee films, though none have been planned yet.

Morrison plays Will Schuester, McKinley High’s Spanish teacher who becomes director of the glee club, hoping to restore it to its former glory.

Mays appears as Emma Pillsbury, the school’s mysophobic guidance counselor who has feelings for Will.

Jessalyn Gilsig plays Terri Schuester, Will’s ex-wife who Will eventually divorced after five years of marriage because she faked being pregnant.

Lea Michele plays Rachel Berry, talented star of the glee club who is often bullied by the Cheerios and football players.

Monteith plays Finn Hudson, star quarterback of the school’s football team who risks alienation by his friends after joining the glee club.

Mark Salling plays Noah “Puck” Puckerman, a friend of Finn’s on the football team who at first disapproves of Finn joining the glee club, but later joins the glee club himself.

Naya Rivera and Heather Morris, who portray Cheerios and glee club vocalists Santana Lopez and Brittany Pierce respectively, were originally recurring actors, but starting in the second season were promoted to series regulars.

Newer Post Cocoa and Co – The Story Behind the Cookie Craze
Older PostLoveDough’s One YEAR Anniversary: Partying Hard Despite Adveristy!