Stemming out with a new style of progressive metal music; Absolace marks the coming together of individuals hailing from very diverse musical backgrounds, and is the brainchild of drummer Greg Cargopoulos. For the first time after 3 years of writing, they have finally joined together to release their first official debut album Resolve[d]; a move which will thrill their wide fan base across the Middle East.

What brought this band together was their mutual passion for music and their converging tastes in Progressive metal. Their shared love for some of the most prolific acts in rock and metal cemented the bond, and their diverging musical training backgrounds made this union even more remarkable. 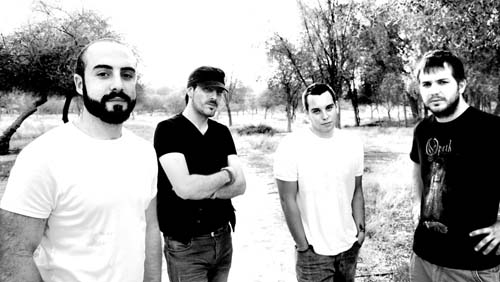 What makes this band live lineup so unique is its diverse mix, bringing stars from various cultural backgrounds together. The band is comprised of: Nadim Jamal (Vocals) from Lebanon, Ben Harris (Bass) from Australia, Greg Cargopoulos from Greece (Drums), Jack Skinner (Guitars) from UK, and Kyle Roberts (Keys, Synths, Samples) from UK.

Absolace do not hand out a simple regurgitation of the same old sound. They have managed to infuse the energy, life experience, and cultural awareness of their time into a musical genre already steeped in a history of social relevance.

“This will be the first time Absolace comes together as a band to perform, and we are really looking forward to it, we have worked very hard for this and just hope people enjoy the final product.”Nadim Jamal (Vocals)

A general pursuit of instinct, rather than a conventional rock band dynamic is one of the strongest distinctiveness of Absolace. The creative method utilized by the members of Absolace espouses a holistic manner of thought, rather than placing a narrow-minded emphasis on individual parts.

The result – Resolve[d] – is the product of a long process that took place at several different locations between September 2008, and June 2009, mainly in the band’s home studio in Dubai. From the outset, the core of the album’s musical configuration has revolved around rhythm, notably because of the drummer’s strong grasp of rhythm. The lyrical content of the record is at times cathartic, and is based on the vocalist’s experiences that have affected him in a profound way.

“Through being involved in several bands of various genres over the years, my style has developed and I’ve incorporated other sounds and musical approaches which have all made their way into Resolve[d].” says Nadim Jamal

“We are all really excited about starting to play live. We have been rehearsing a lot, putting in hours and hours in the studio to make us sound as tight as possible. Everybody in the band has really put in so much effort to learn their parts as fluently as possible.” Greg Cargopoulos (drums)

Resolve[d] will mark a new approach to Progressive metal and offer a fresh new look at the tantalizing and promising future that awaits Absolace. Their extensive music talent and knowledge has been learned throughout years of determination and incredible breakthrough work, and now it’s their time to share the richness of their cultural and musical flavor with the world.
Absolace will be performing at a 2-part album launch to mark the album’s release. The first show is on Friday 23rd July, at Rock Nation in The Music Room, Majestic Hotel, Dubai. The second show will be Friday 30th July at Metal Asylum in Aussie Legends, Rydges Hotel.