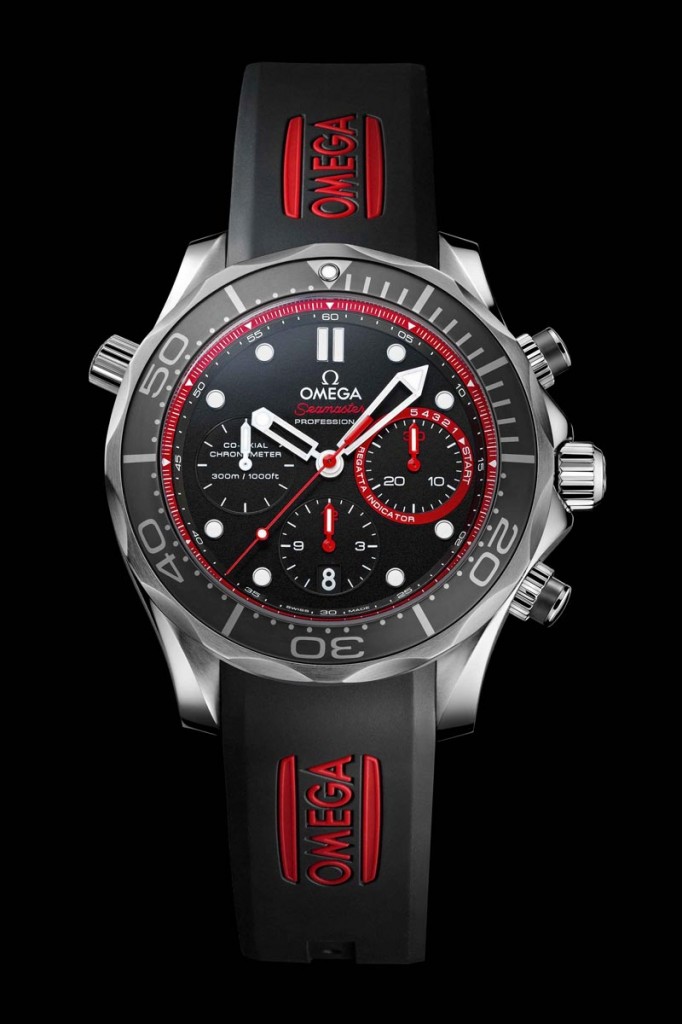 OMEGA unveiled the new Seamaster Diver ETNZ Limited Edition timepiece at a special event with Emirates Team New Zealand Skipper – and Brand Ambassador – Dean Barker on Wednesday in San Francisco.  Designed to commemorate the 34th America’s Cup and celebrate OMEGA’s partnership with Emirates Team New Zealand, the new timepiece was presented to Barker and to ETNZ managing director Grant Dalton in front of media and guests at the ETNZ Base Camp on the Bay.  Barker, an OMEGA Ambassador, will skipper ETNZ’s new AC72 boat and lead the team in the world’s most famous and prestigious sailing competition, which begins with the Challenger Series on July 7th.

OMEGA’s long-term partnership with the Team dates back to 1995, the last year the America’s Cup was contested in the United States, when syndicate head Sir Peter Blake joined OMEGA as a Brand Ambassador and led the team to victory in San Diego.  Barker, an America’s Cup champion in 2000 and a former Olympian, has been part of the OMEGA family since 2001.  Today, OMEGA continues to be an enthusiastic and visible presence at the America’s Cup as it proudly supports Emirates Team New Zealand as one of its top sponsors, with the OMEGA logo prominently featured on the jib, both hulls and the wingsail of ETNZ’s AC72.

“We are thrilled to be here in San Francisco, on the eve of America’s Cup competition, to celebrate our long-time partnership with Emirates Team New Zealand and to unveil the new OMEGA Seamaster Diver ETNZ Limited Edition timepiece,” said OMEGA President Stephen Urquhart.

“OMEGA has an undeniable connection to the sea, from being the only company in history to produce a wristwatch that received marine chronometer certification, to our history with Sir Peter Blake, solo yachtswoman Ellen MacArthur, and ecologist/filmmaker Yann Arthus-Bertrand,” Urquhart added.  “We are proud to serve as Official Timekeeper for Emirates Team New Zealand and wish Dean and the team much success here in San Francisco.”

The link between sailing and timekeeping dates back to the days when sailors relied on high-precision marine chronometers for navigation.  Though sailors rely on new technologies like satellite systems to navigate today, the OMEGA Seamaster remains the wristwatch of choice for many of the world’s great sailors – including Barker and Dalton.

“I’m honored to wear the new Seamaster Diver ETNZ Limited Edition timepiece and am proud to represent OMEGA as we embark on the 34th America’s Cup,” said Barker.  “We appreciate OMEGA’s commitment to Emirates Team New Zealand – and to the sport of sailing throughout history.”

“I admire OMEGA’s passion for the sea,” added Team Managing Director Grant Dalton, who joined Team New Zealand in 2003 after a storied, two-decade racing career.   “They are a terrific – and important – partner for Team New Zealand and we appreciate their support.”

Following the press conference, Barker, Dalton and Team New Zealand launched the ETNZ AC72 into the Bay for a training session on Wednesday afternoon.

The new OMEGA Seamaster Diver ETNZ Limited Edition boldly celebrates ETNZ’s campaign to claim sailing’s greatest trophy.  The screw-in caseback is embossed with the ETNZ logo; the limited edition number and “Challenger for the 34th America’s Cup” are engraved around the outside of the case back.  The new timepiece is powered by the Co-Axial calibre 3330, and, befitting a watch inspired by and created for seafarers, the exclusive chronograph is equipped with professional dive features including a unidirectional rotating bezel and a helium escape valve, date corrector, Super-LumiNova coating, and is water resistant to 30 bar (300 metres / 1000 feet).  Only 2,013 of the Seamaster Diver ETNZ Limited Edition timepieces have been produced.