Sophisticated and sporty jackets, ‘graphic’ jumpers, urbanised surf styles, wrapped jerseys, and more; Bruce Pask and Jason Rider have made their pick, in different colors, textures, and looks, on nytimes.com:

These men’s fashion designers and their distinct philosophies won our hearts at New York Fashion Week this season. 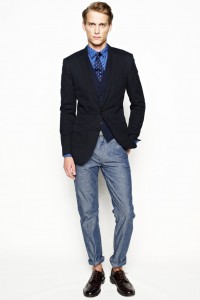 J. Crew
Frank Muytjens, the head of men’s design at J. Crew, turned to Op Art and color-blocked paintings as inspiration for the new men’s collection, which was presented at the tents at Lincoln Center on Sept. 11. Bright color pops of marigold, lemon yellow and cobalt blue were peppered throughout, giving the company’s signature pieces a strong punch. The designer’s favorite look was a very sophisticated combination of casual and tailored clothing in an array of blues and blacks: the signature Ludlow jacket made in seersucker and overdyed black, paired with a navy blue wool vest, a bright blue bandanna print shirt, darker blue tie and light blue chambray pants. It was a stunner and a master class in mixing texture and color. 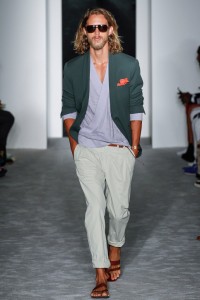 Michael Bastian
Michael Bastian’s sleek, sexy runway shows have become a highlight of New York’s fashion week, and one that often makes editors blush. (Many even avert their eyes at the sight of his scantily clad male archetypes.) Bastian should be allowed his fun, especially because it never seems to diminish the impact of his specific take on classic American men’s wear. A lavender wrap-style top in jersey worn underneath a shawl-collared jacket and paired with slim two-pleated cropped khakis looked fresh and new, a perfect blend of sexy and sophisticated.

Black Fleece by Brooks Brothers
This collection is the perfect distillation of the designer Thom Browne’s Jekyll-and-Hyde-type approach to clothes. Here, he balances his wacky sensibilities with his more rigid aesthetic rooted in Kennedy-era America beautifully. By taking an oversize palm print from a photograph by Peter Beard and placing it on sport jackets, shorts and shirts in wild combos, he turns Hamptons weekend wear on its head, fulfilling a sort of Slim Aarons-on-acid vision. 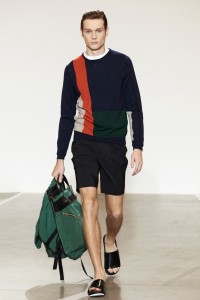 Tim Coppens
In his third, and most thorough, collection, Tim Coppens elaborated on his sporty aesthetic with the injection of modernist colors like rust, ivy green and sepia, breaking up a typically neutral palette. Zipper-laden bomber jackets and slim trousers equipped with technical details returned, but it was this color-blocked intarsia sweater that really stood out. Inspired by the painter Richard Diebenkorn’s “Ocean Park” series, the sweater’s stacked strips and boxes of color make as much a graphic impression as the more involved mixed-media pieces that Coppens is known for. 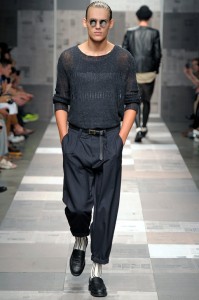 Robert Geller
While surf as a fashion reference is quickly becoming as exhausted as heritage is, Robert Geller explored a darker twist on the theme, finding inspiration in the photographer Sarah Moon’s ominous depictions of beaches to create his latest collection. Wet suits are reimagined as black neoprene moto jackets and leggings; abstract brushstrokes take the place of Hawaiian prints; and slouchy shorts and sleeveless tops are offered in black, charcoal and navy, instead of sunny, oceanside colors. Where this urbanized surf idea works best is in the silhouette of a sheer knit over a tank top, tucked into pleated trousers and punctuated with slip-ons by a collaboration between Geller and Common Projects.