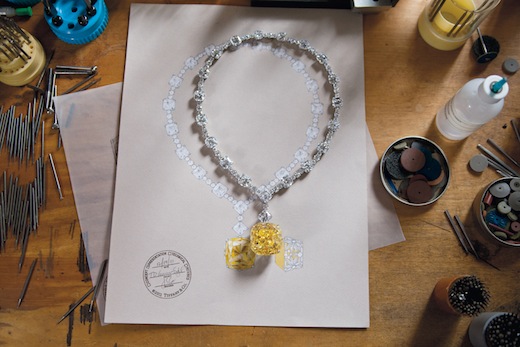 The infamous and timeless Tiffany & Co., which has become every lady’s best friend, is celebrating its 175th anniversary this year by creating a new setting for the iconic 128.54-carat Tiffany diamond.

Watch the video to learn more about it. 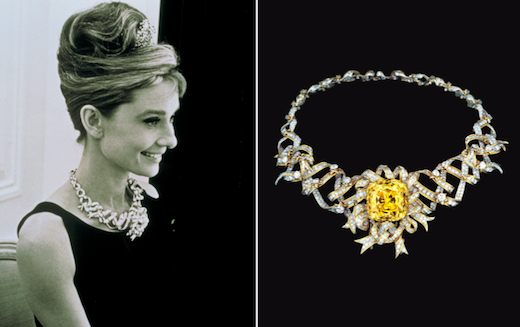 The Tiffany Diamond in 1961, set in a Jean Schlumberger Ribbon Rosette necklace, worn by Audrey Hepburn in Breakfast at Tiffany’s publicity photos

The original 287.42-carat diamond was discovered in South Africa in 1877, and a year later, Charles Lewis Tiffany bought it and sent it to Paris where it was cut to its current 128.54 carats. In 1901 the Tiffany diamond won top honors at the Pan-American Exposition in Buffalo; and in 1955, the diamond was displayed in Tiffany’s Fifth Avenue windows celebrating the holiday season, which was the first and last time the diamond appeared on a window display. In 1961, the Tiffany Diamond was set in Jean Schlumberger’s Ribbon Rosette necklace, which Audrey Hepburn wore in the Breakfast at Tiffany’s publicity photos. In 1995, the diamond was set in yet another Jean Schlumberger design, the “Bird on a Rock”, and remained that way for 17 years. 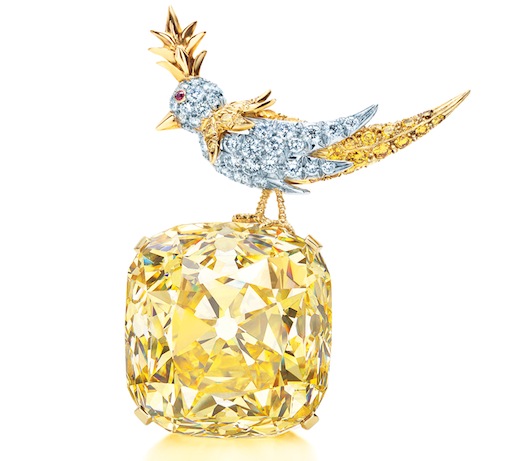 The Tiffany Diamond in 1995, set in a second Jean Schlumberger design, “Bird on a Rock”

This year, to honor the 175th anniversary of Tiffany & Co., the diamond has recently been reset in a white diamond necklace and then toured the world in its new setting, returning to its home at the main floor of Tiffany’s Fifth Avenue store.

Which is your favorite setting for this gorgeous diamond?