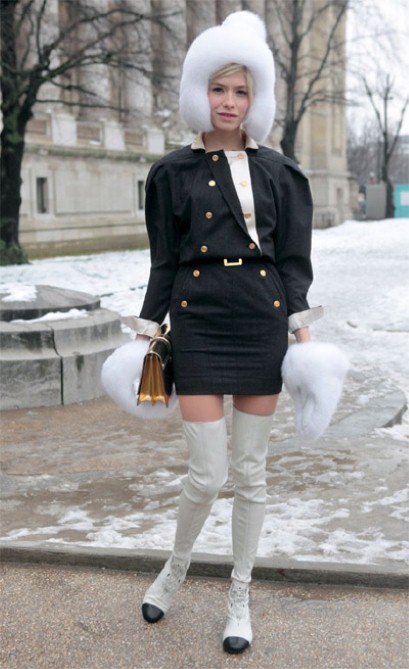 Paris is not at its best in the dog days of January. The Christmas decorations are still up. Bedraggled, limp and defeatest, like the skew-whiff feathers on a tipsy Can-Can dancer’s hem, they could be a symbol of the city’s general mood. Try getting a taxi or a bus in this city during the snow. Non. Really. No attempt to grit the streets either.

“We’re the only country in Europe to grind to a halt because of a few centimetres of snow,” embarrassed Parisians grumbled. Er, no, actually.Meanwhile, every time I tuned into the Today programme via the internet, Nigel Farage seemed to be on, gleefully gearing up for our Euro-exit. You know what, Nigel, I think we may have more in common with the French than you think.

The Siberian snowscapes played havoc with everyone’s outfits. If you’re obliged to wear tractor-soled boots every day, you have to abandon 90 per cent of your carefully worked-out looks. Everyone that is, apart from the Russians, who weren’t giving the intemperate conditions any quarter – no tights for them, or at least the wispiest, nude-iest ones. With the French, British and even American press unanimously prioritising warmth and safety over cocktail wear, the snow-blanketed road was (metaphorically) clear for those Russian f’rowers to steal the show.