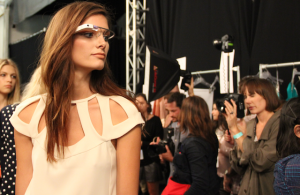 Diane von Furstenberg led the pack, surprising in-person and online attendees by showcasing Google Glass — the futuristic eyewear device Google is building — down the runway. Photos were taken backstage using the device, and shared to DVF’s Google+ Page  ahead of and during the show.

A short film compiled from video taken with glasses worn by models, Furstenberg and members of her team was released three days later. Tweets about the DVF show were up 160% from last season, making her the third most talked-about designer on Twitter during Fashion Week, according to third-party data from social media agency, Whispr Group.