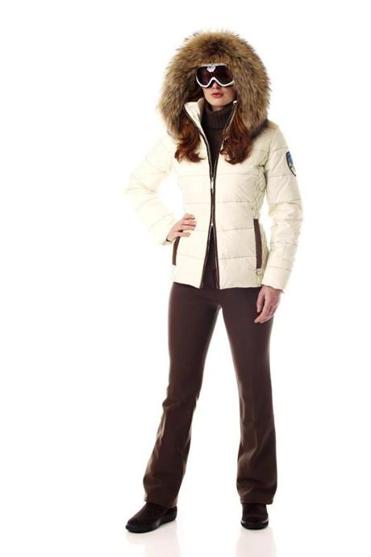 There were years, and many of them, when it appeared that snowboarders were being swallowed by their clothes. Jackets two sizes too big and pants with legs wide enough to cover the thighs of professional football players were de rigueur for boarders. That style was quickly adopted by skiers — and it appeared unshakable.

But as the gap between ski wear and snowboarding apparel narrows, so does the silhouette of the clothes. On the list of trends for the slopes this season are pants that actually fit, and new technologies that allow companies to produce jackets that are body-hugging.

“I think that the number one trend I’m seeing is the advancement happening right now in technical fabrics that stretch,” says Robert Yturri, senior vice president of product and brand management at Obermeyer. “Silhouettes are becoming a lot more form-fitting. That versatility of having a ski jacket that goes from slope to street is what we’re seeing. Once you cross that barrier, you can really bring in some fashion and runway influence, and still have a technical piece that you can ski in.”

Part of the reason why both boarders and skiers are seeing this shift is because sportswear companies that once considered themselves strictly ski, or strictly snowboard, have dropped those distinctions. The merge of ski and boarding fashion, along with ever-evolving trends, has made those over-sized pieces dated.

“The lines have become more blurred,” says Steve Kopitz, president and CEO of www.skis.com. “Not only are companies crossing over, but you’ll see skiers wearing Burton. You’ll also see a lot of companies that don’t want to pigeonhole themselves. A few years ago, a company would say they were strictly snowboard or strictly ski. That’s not the case anymore.”

Here are a few other trends you can expect to see on the slopes this winter. 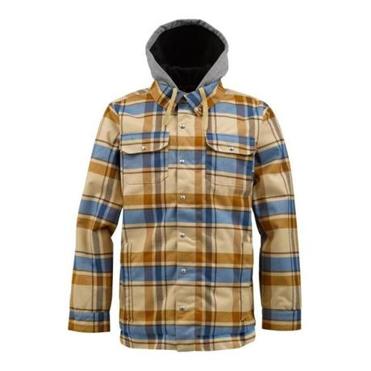 Slope to street: “A lot of the clothing is looking like the same things you would wear to the bar, or out on the street, whether it’s ski pants that look like jeans, or jackets that look like flannel shirts, or other types of street-type looks,” says Kopitz.

He attributes this look to the freeskiers, who were more often seen in layers of street clothes than traditional ski clothes.

“Five years ago, everything was nylon and polyester,” says Brigitte Liedke, clothing and footwear buyer for www.skis.com.

Pattern: While the slope-to-street crowd is trying to give the impression that they are not dressed for the hills, another trend can be seen with skiers who want the world to know they have been on the chair lift.

“The patterns in the jackets have gotten even wilder in the previous year,” says Kopitz. “It’s obvious that those people want to say, ‘I’m a skier or a snowboarder,’ because you wouldn’t see these patterns on the streets. You have a divergence. There’s probably more choices in design in ski wear than there ever was.”

Those patterns have arrived in the form of color blocking, plaids, and wild geometric prints.

Luxury: Boston ski wear designer Mark Miller is known for luxury touches such as fur and Swarovski crystals, but what he is also seeing in the luxury market is an increase in the use of cutting-edge fabrics. Not only do posh skiers want to look good, they also want to be just as warm as other skiers. One of Miller’s favorite new materials is a rich charcoal fabric that looks like wool, feels like cotton, but is also highly water repellent. He’s also using thinner insulators, much the same as sportswear companies, for narrower silhouettes and added warmth.

But while fabrics have become more high tech, the details on jackets and sweaters are looking more retro.

“We did a lot of research into patches that you’d find sewn onto ski jackets and sweaters in the 1960s,” Miller says. “A lot of people in their 20s and 30s would have a share in a ski house. The house was like a club, and if someone in the house was a graphic designer, you’d find a lot of these logos.”

He has seen other companies come up with these patches in what he refers to as a “James Bond influence.” Lacoste designer Felipe Oliveira Baptista says he was inspired by France’s 1966 national ski team while designing the brand’s Fall-Winter 2013 collection for pieces such as alpine sweaters.

Color: When it comes to color, specialists say don’t hold back this season. Betsy Pantazelos, manager of Patagonia Boston, say she is excited about this year’s parade of bold colors. In recent years, that meant blaring neons.

“The neon thing always seems to disappear as quickly as it pops up,” Obermeyer’s Yturri says. “So this year you’ll see shimmering blues and greens. There will be acid yellows instead of neon yellow. And hot pink is becoming a big color for women this year. It’s not just a kids’ color anymore.”

In the past, men played it safe with black ski pants. But color is invading pants as well.

“Bright colors are getting stronger and stronger, especially in our older demographic,” says Kopitz. “While they’re older, they still want to be bright. What’s really different is that 80 percent of our pant sales to men used to be black pants. They would have a color jacket, but they would still wear a black pant. But now there are no rules.”

Kopitz also attributes the trend to skiers themselves.

“They have bold personalities.”

Newer Post The Xbox 720 specs, news and release date
Older PostBritney Spears flashes her boob as she goes bra-less in a flimsy frock