Shocking Fashion at the Grammys 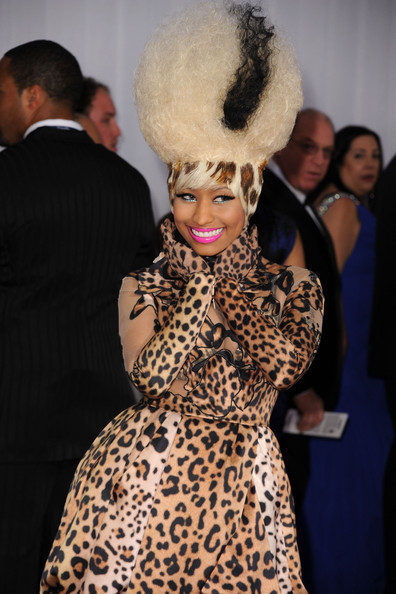 Pop music’s sweethearts are notorious for daring red carpet fashion, but this year’s  Grammy Awards, the songstresses walked in with some shocking fashion statements, with touchable textiles, wild prints, and, of course, oh so much glitter.

Nicki Minaj made her Grammy debut in cheetah from head – literally, with the print spray-painted in her sky-high Elvira hair – to toe. The playful details of her Givenchy dress, namely a petal skirt and high neckline, could have been promising had the look not been overwhelmed by matching leggings and ankle boots. 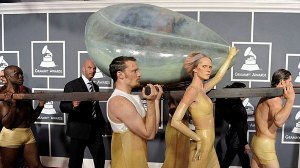 Ciara’s up-to-there slit amped up the drama of her navy and white tribal-inspired dress, also by Emilio Pucci, the designer who dominated the night.

Looking less-than-angelic in white were Katy Perry and Rihanna, who jumped on the skin-baring bandwagon in Armani and Jean-Paul Gaultier ensembles, respectively. Perry’s bedazzled bustier and sheer skirt were paired with costume-y white wings. 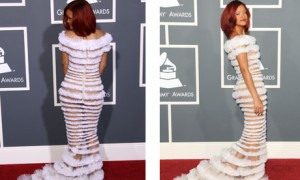 Rihanna made a similarly risky choice with her sheer paneled white gown, which, while a polarizing choice, undeniably fit the singer like a dream.

Of course, no amount of skin-baring or animal print could top the shock-factor of Lady Gaga’s Hussein Chalayan-designed egg pod, in which she was carried during her red carpet entrance.

While glitter and excessive skin are predictable award show fare, some of the most memorable moments emerge from the fearless fashion that these pop divas don.