Oscars 2013: the best and worst dressed

Jennifer Lawrence triumphed in Dior, while Anne Hathaway’s satin dress turned treacherous and Amy Adams was swamped by her ruffles. When it comes to the gents, check out Eddie Redmayne’s bohemian velvet and Ben Affleck’s dress-for-success three-piece suit. 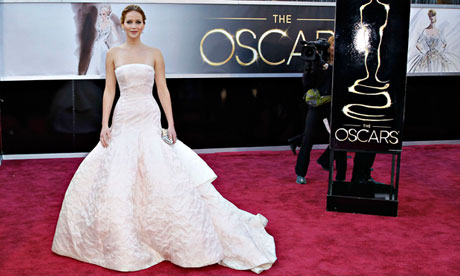 This was Jennifer Lawrence’s night. She won the Oscar, and she won the red carpet too, in Christian Dior. The formula for a successful Oscar dress is similar to that for a successful Oscar film: you want plenty of drama but not too many complications. This dress does that perfectly. The silhouette is knockout, and there are no fussy styling details to detracting from that. The swept-back hair, neat silver clutch and delicate jewellery are all in harmony. There will be celebrations at Christian Dior HQ in Paris: the awesome internal structure (note how it looks good from every angle), the perfect skin-flattering pale (moonshine?) and the dappled texture to the fabric (so it never looks shiny or crinkly, even under a million flashbulbs) are a great advertisement for the Dior atelier. 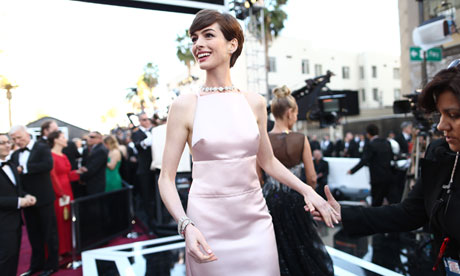 I think we can assume it wasn’t Anne Hathaway’s goal to be upstaged by her own nipples, but that’s what happened in this Prada gown. The dress was a last-minute choice: LA “sources” say she switched from her usual Valentino at the last minute. Those aren’t actually her nipples, by the way, they are darted seams in the fabric. (Look at how the skirt of the gown holds its shape as it falls to the floor, and you can tell that the satin is much too heavy for nipples to bore through like that.) But such dressmaking niceties won’t help save this dress for being remembered for the nipples. I don’t love this look anyway: too angular and sharp. She looks like an enormous, shiny pair of scissors. 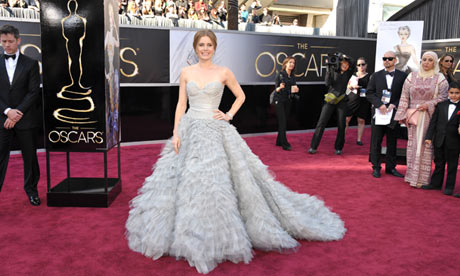 Amy Adams wore Oscar de la Renta. I think this dress could have worked in black – picture it, a sort of black-swan red-carpet glide – but it doesn’t work in grey. It doesn’t even make sense in grey. Who wears a grand, beaded-bodice, ruffle-tier skirt ballgown in the colour of dishwater and rainclouds? I guess she was going for sophisticated, but it comes off like fashion self-sabotage, which is insane, because the shape is fabulous. Like I said: shoulda gone for black. Also, there’s too much going on in the bottom half of the dress, to the point where it completely upstages her face. 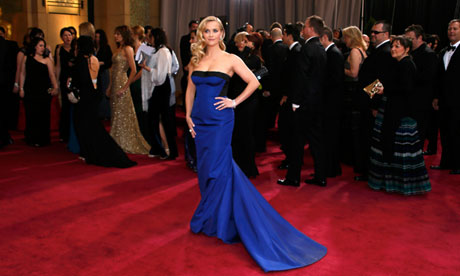 Girlfriend looks HOT in this dress, right? I so much prefer the later-years Reece Witherspoon – the older-and-wiser, second-husband, curvier and all-round saltier version – to the cookie-cutter American poppet we first met. This Louis Vuitton dress feels like the first confident rendition of that persona on the red carpet. (Reese’s 13-year-old daughter helped her pick it out, apparently, which is cute.) The colour is bold, not standard red-carpet fare, but works brilliantly with her hair, and the trompe l’oeilwaist-cinching shape is a fashion detail that will make sure this look gets plenty of fashion-page action. 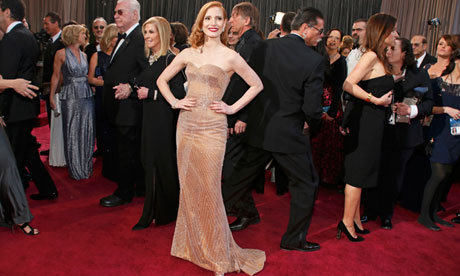 Jessica Chastain’s Armani Privé dress is elegant and timeless, a bona fide movie-star gown, with bona fide Harry Winston jewels. When I first saw her, I thought I preferred last year’s fabulous Alexander McQueen black-and-gold number – at first glance this looks like it could be the petticoat to that dress. But the subtlety is growing on me: the colour is the perfect compliment for that incredible hair of hers and those awesome red lips, and I love how the swirling seams of beads make this fitted shape look softer than it is.

Eddie Redmayne went traditional for Oscar night. He often rocks a wolfish bit of Burberry velvet on the red carpet, but went for a straight-up tuxedo, by Alexander McQueen, complete with satin lapels, bow tie, and studded shirt buttons. The skinny cut of the suit keeps it modern, but thepiece de resistance? Those velvet slippers, which show the Afflecks of this world that having a beard isn’t the only way to tell the world you have a bohemian/subversive side.

My feeling about Kerry Washington is that she loves her fashion probably a little bit too much to really nail it on the red carpet. She’s being held back by choosing the gorgeous party dress over the grandstanding Oscar Dress. This is by Miu Miu, and if she hit up the dancefloors I bet she was the belle of the ball, but the two-tone effect doesn’t quite work on the red carpet: she looks as if she’s wearing separates, and the impact is muted.

Sally Field in Valentino is one of my favourite looks of the night. The colour – bold Valentino red – never fails to deliver. The sheer long sleeves are a graceful way to draw a veil over arms – no point competing with Jennifer Aniston on this, you gotta pick your battles – without looking prematurely grandmotherly. I love the classic pear-drop earrings, and the simplicity of no baubles cluttering up that clean neckline. 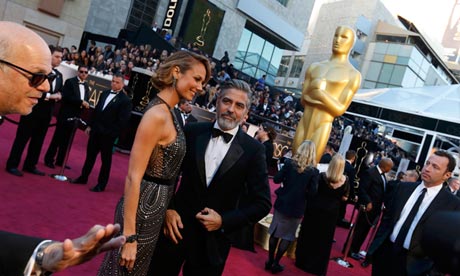 Jennifer Aniston knows her brand. She has never gone in all-guns-blazing on the red-carpet wars, preferring to opt for the dress that is straightforwardly pretty and the safe, familiar choice over the straight-off-the-catwalk attention-grabbing numbers. That’s who we we want Aniston to be – the unthreatening, smiley girl-next-door. She’s made a fine career out of this, and she’s not about to jeopardise anything by going off-brand in some crazy dress. So, she wears strapless Valentino satin, has a great blow-dry, and smiles a lot. Job done.

There is something weird going on with Ben Affleck’s bow-tie, which needs straightening. But that aside, he scrubbed up well. The three-piece tuxedo and polished shoes say to the academy: now that you’re taking me seriously, I don’t have to play the maverick/rebel any more. His wife Jennifer Garner wore Gucci, and $2.5m worth of diamonds, so perhaps he was blinded by looking at her and forgot to straighten the tie.

George Clooney and Stacy Keibler are unusually understated here. Clooney has taken on Daniel Day-Lewis’s Lincoln beard, which is a little out of his silver-fox comfort zone. Keibler, meanwhile, is doing her own version of the silver fox look, in a retro-style beaded Naeem Khan dress. It’s classy, rather than sexy.

Helena Bonham Carter is singlehandedly keeping this neckline alive. It’s the neckline posh girls wore to balls in the 1980s and 1990s. A sort of low-scoop with plenty of cleavage but everything squished down safely, all the better for pogo-ing in when a bit squiffy. Literally nobody wears this neckline any more, ever, even posh girls at dreadful parties, except for Bonham Carter. But does she care? Look at that face. She couldn’t care less. She’s off to get squiffy and pogo. She’s awesome. 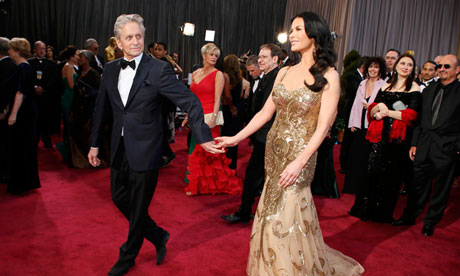 Amanda Seyfried is in Alexander McQueen. I don’t know who wrote the memo to the red-haired women telling them grey was a flattering colour (see also: Amy Adams) but I don’t think she’ll be super-popular right now. The dress is exquisite and the neckline is delicate and beautiful but the shade is oddly underpowered. You can tell she’s trying to vamp it up with the pose, but it’s not quite working.

Hey, Catherine! Beyoncé called, and she wants her gold dress back. Michael Douglas and Catherine Zeta-Jones took a break from playing golf to hit up the red carpet. I love how the dynamic never changes with these two: he is still the slightly rogueish elder statesman, and she is the showgirl in swooshy metallics.

Nicole Kidman is good value on a red carpet as her dress choices tend to be either brilliant or brilliantly awful. This is one of the good years. She gets props for wearing a gown straight off the catwalk – this is look number 27 from the London fashion week show by L’Wren Scott, the designer girlfriend of Mick Jagger, which took place just seven days ago. Obscure red-carpet fact of the day: this dress is inspired by the paintings of Gustav Klimt.

The question raised by this photograph of Christoph Waltz and Bradley Cooper is, what does the waistcoat mean? Personally I think it’s a symptom of the Downton Abbey effect, because we all know how the Americans love that show. Apparently Bradley’s tuxedo was made by his cousin, designer Giambattista Cooper. All together now: aaaw. 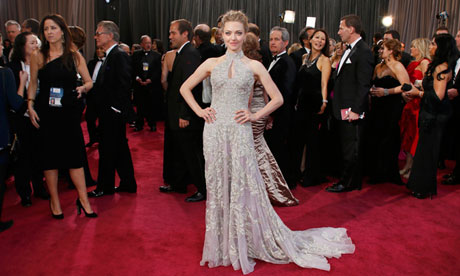 There isn’t a dress in the world that could make Kristen Stewart look like anything other than Kristen Stewart. She’s in Reem Acra, and it’s feminine and refined, but she’s on crutches, and her hair looks insane, and you get the feeling there was either a tantrum earlier or there will be one soon. She’s K-Stew, that’s how she rolls.

Salma Hayek’s husband owns Gucci, McQueen, Stella McCartney and Yves Saint Laurent, which must come in super-handy on nights like this. She basically married the world’s best wardrobe, although obviously I’m sure she totes loves him for his personality. This dress is by McQueen, and she looks incredible, like an Ancient Egyptian goddess.

Helen Hunt’s dress is this Oscar’s big ethical-fashion moment: it is by the Conscious collection for H&M. Which is fantastic. However, just because you’re saving the world, doesn’t mean you should skip ironing your clothes.

The Day-Lewises were this year’s Oscar couple. He won his third Oscar. She is probably the most beautiful woman at this ceremony. He wore navy Domenico Vacca, which totally works, and everyone breathed a sigh of relief he didn’t show up with a stupid beard. And she showed why black lace Dolce will never, ever let you down. 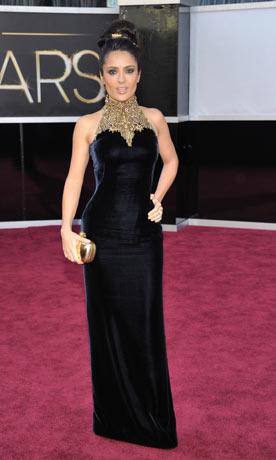 Newer Post BeirutNightLife.com Brings You the Official Lebanese Top 20 the Week of February 24th, 2013!
Older PostJennifer Lawrence takes a tumble in the Oscars