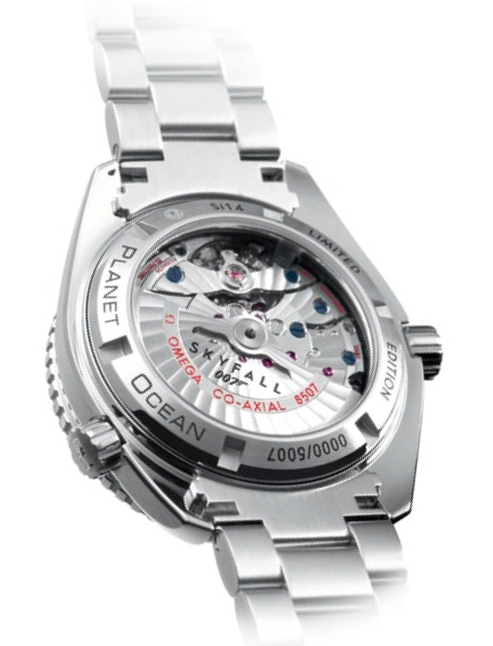 A faithful OMEGA agent, Daniel Craig talks about his preferences in the watch domain, with the steel on steel Seamaster Planet Ocean 600M OMEGA Co-Axial Chronometer stealing his heart. The Autumn collection is certainly inspired by the beau’s prowess and style, designed for tough mission. Get a four-year warranty for your watch, talk about stability and precision..

In SKYFALL, to be released in autumn of 2012, James Bond will take to the screen for the 23rd time with Daniel Craig reprising the role of the world’s favorite secret agent for the third time running. And once again, agent 007 will wear an OMEGA Seamaster.

Like every Planet Ocean, the new watch is ready for underwater adventure. Equipped with a unidirectional rotating diving bezel and a helium escape valve, the watch is water resistant 60 bar / 600 metres / 2000 feet.

The watch has a 42 mm brushed and polished stainless steel case and a matching patented screw-and-pin bracelet whose divers’ clasp is engraved with “007”. The rotating diving bezel is distinguished by its matt black ceramic ring with a chromium nitride diving scale. 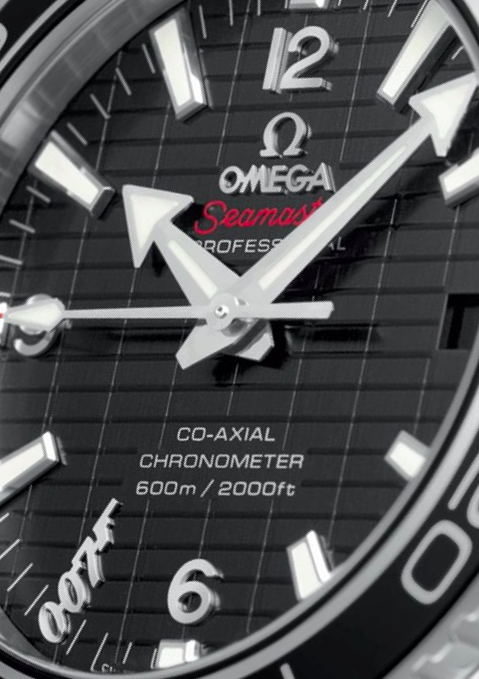 The applied indexes on the matt structured black dial are coated with white Super-LumiNova emitting a blue light as are the polished, facetted rhodium-plated hands. The exception is the minute hand which emits a green light, as does the dot on the diving bezel. This feature makes it easy for divers to keep track of their time at a glance. At the 7 o’clock position is a 007 logo and at 3 o’clock, there is a date window.

The Seamaster Planet Ocean 600M SKYFALL Limited Edition is powered by OMEGA’s exclusive new Co-Axial calibre 8507. SKYFALL 007 is on its rotor in black-varnished engraving. The movement is visible through sapphire crystal in the brushed screw-in caseback.

Along with OMEGA’s industry-changing Co-Axial technology, the watch is equipped with an «Si14» silicon balance spring. The combination is so stable and reliable that the Planet Ocean comes with a full four-year warranty.

The Seamaster Planet Ocean 600M SKYFALL wristwatch is being produced in an edition limited to 5,007 pieces and is delivered in a special presentation box. 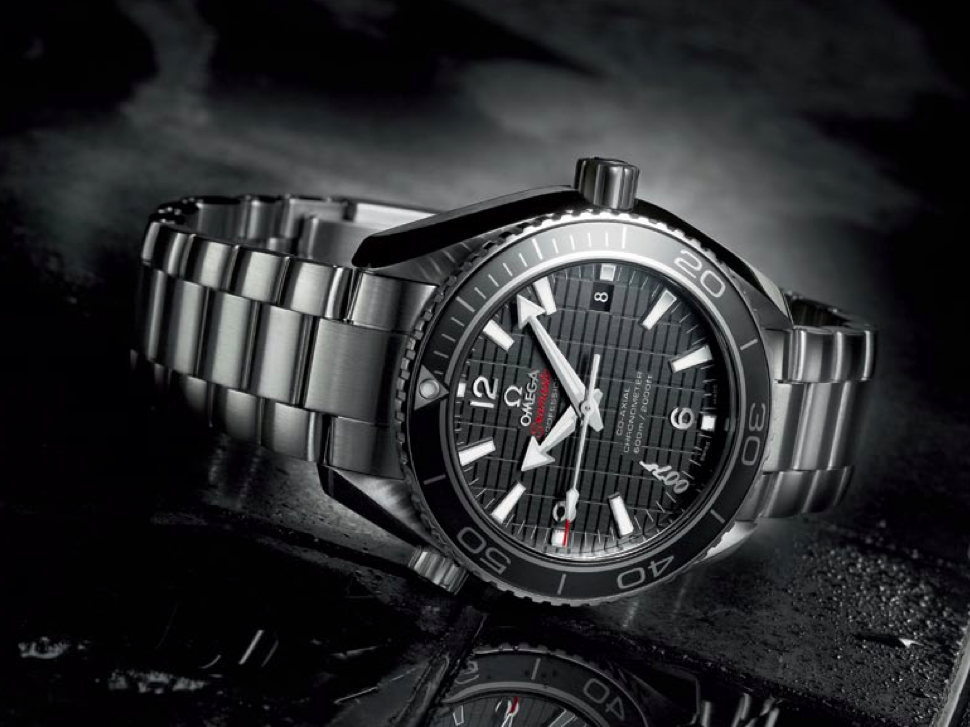 When Daniel Craig reprises his role as James Bond in SKYFALL, he will be wearing an OMEGA Seamaster Planet Ocean 600M 42mm with a black dial and a matt black ceramic unidirectional rotating divers’ bezel.

Bond fans and OMEGA enthusiasts will know that the world’s favourite secret agent has been wearing Seamasters since 1995 and the Planet Ocean has been his choice since CASINO ROYALE in 2006.

For SKYFALL, Bond’s choice is the steel on steel Seamaster Planet Ocean 600M OMEGA Co-Axial Chronometer, whose design features can be traced directly back to the classic Seamasters of the 1950s.

Inside the case it’s a different story: the watch is driven by the OMEGA Co-Axial calibre 8500 whose revolutionary Co-Axial escapement and free sprung balance deliver long-term stability and precision, dramatically reducing the need for servicing. Also equipped with an Si14 silicon balance spring, the watch is delivered with a four-year warranty.

The hands and indexes have been treated with Super-LumiNova and are legible in all lights and conditions and offer a stark contrast to the matt black surface of the dial.

The Super-LumiNova on the indexes, the hour hand and the seconds hands emits a blue light; the luminescent material on the minute hand and the dot on the bezel appear green. This contrast means that divers can tell at a glance how much time has elapsed when they are underwater. Even the sweep of the luminous orange-tipped seconds hand can easily be read in the dark. There are Arabic numerals at 12, 6, and 9 o’clock with a date window at the 3 o’clock position on the dial.

A professional divers’ watch, the Seamaster Planet Ocean 600M OMEGA Co-Axial Chronometer is equipped with a helium escape valve. The stainless steel bracelet features a diver’s clasp which allows its length to be extended to fit around a wetsuit. As its name suggests, the Planet Ocean 600m is water resistant to a depth of 600 metres (60 bar / 2000 feet).

OMEGA AND THE WORLD’S MOST STYLISH SPY

James Bond has worn an OMEGA Seamaster in every film since GOLDENEYE in 1995. Oscar-winning costume designer Lindy Hemming first introduced Bond to OMEGA. She described Bond as a naval man and a discreet gentleman of the world, so the Seamaster was the obvious choice. OMEGA couldn’t agree more! 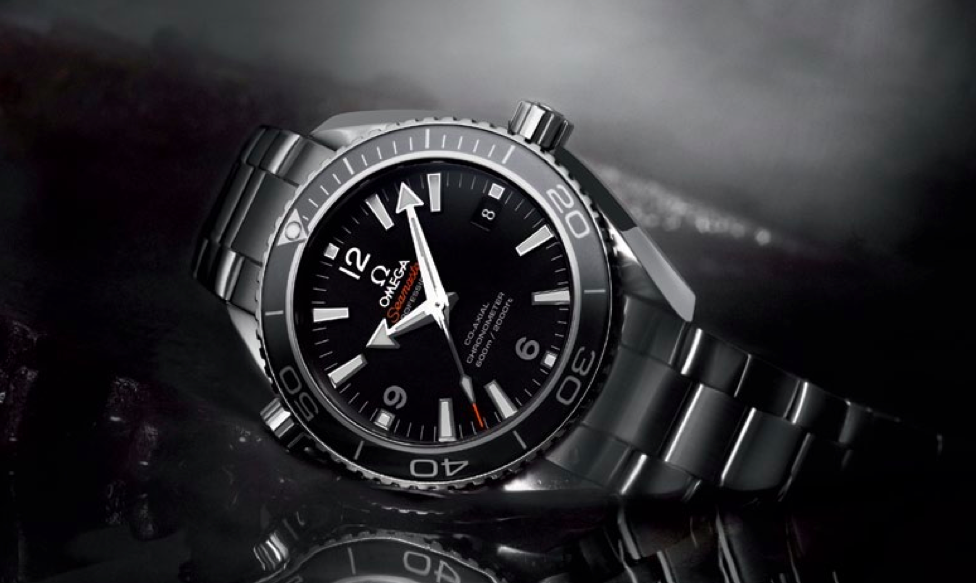