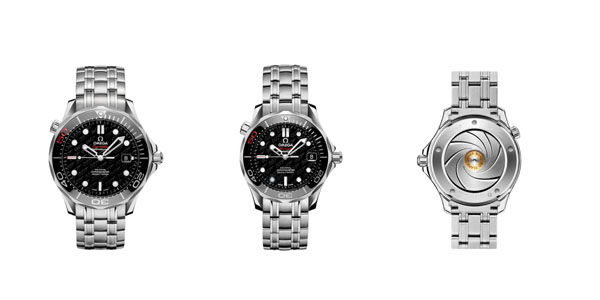 To celebrate fifty years of James Bond films, OMEGA is releasing a special update of the incredibly popular Seamaster Diver 300m James Bond watch which has been worn by 007 in every adventure since GoldenEye. The James Bond 007 50th Anniversary Collector’s Piece has been created in two sizes, 41 mm and 36.25 mm.

The cases of the watches are made of stainless steel and they feature ceramic bezel rings with diving scales in matt chromium nitride with the number “50” in red as a reminder that the watch is celebrating a very special anniversary.

Each version of the watch is presented on a classic brushed and polished OMEGA-patented screw-and-pin stainless steel bracelet.

The lacquered black dial features a 007 monogram. The 41 mm version has 11 applied indexes; the 36.25 mm watch has ten with a diamond index at the 7 o’clock position – a reminder that this watch was created to honour the film history of agent 007. The indexes are coated with white Super-LumiNova with a blue emission, allowing ease of reading in all light conditions. There is a date window at 3 o’clock.

Both versions feature OMEGA’s calibre 2507 self-winding movement fitted with the revolutionary Co-Axial escapement, the component that has driven a revolution in mechanical watchmaking since it was launched in 1999.

The watch is a certified chronometer.  Its screw-in case back is stamped with a gun-barrel design. There is a “bullet” decoration fixed on the rotor that can be viewed through a central sapphire crystal with anti-reflective coating inside. The watch also has a unidirectional rotating bezel. A helium escape valve allows helium atoms to escape during decompression, particularly necessary for professional divers operating from diving bells.  As its name suggests, the watch is water resistant up to 300 metres.

While some of the advanced features will appeal particularly to divers, the James Bond 007 50th Anniversary Collector’s Piece will prove irresistible to fans of 007 and to anyone interested in elegant, distinctive timepieces.

In 2012, EON Productions will release Skyfall, the 23rd film in the franchise, with Daniel Craig in the role of James Bond.