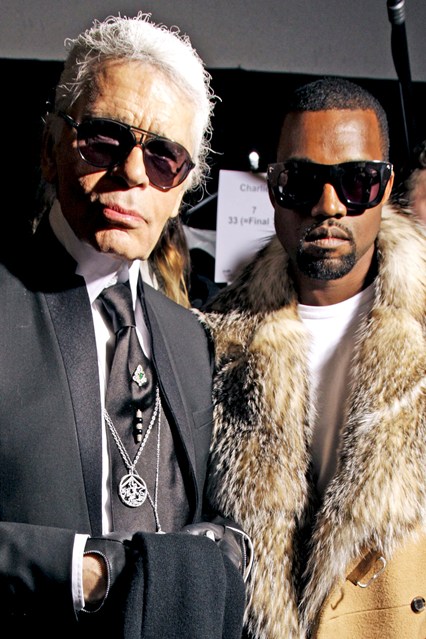 Vogue tells us about a possible dynamite duo: Karl Lagerfeld and Kayne West are rumoured to be working on a collaboration, following a business lunch meeting in New York. The speculation is yet to be confirmed by Chanel. The legendary designer and rapper were spotted at the Mercer Hotel last week and allegedly discussed business.

“They were in a deep conversation, then later appeared to be getting devices out to discuss design ideas,” a source told the New York Post.

West was photographed by Lagerfeld for this year’s touring Little Black Jacket Exhibition, which opened in London earlier this month. He also attended the label’s most recent spring/summer 2013 show during Paris Fashion Week.

Karl Lagerfeld is the master of reinvention, having repeatedlytransformed himself as well as his labels. He is currently the  creative director of Chanel, Fendi and his eponymous label. He has previously designed for Chloe and created a range for H&M.