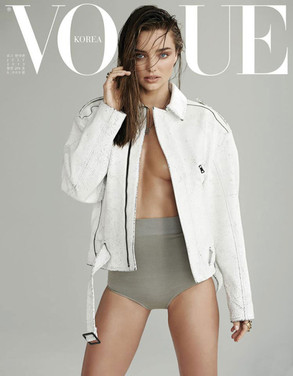 Miranda Kerr seems to be in a nude mood as of late.

Just weeks after the former Victoria’s Secret model released a topless photo as part of her Kora Oranics skincare line campaign, she’s baring all again. This time on the cover ofVogue Korea.

This new cover comes out halfway throughOrlando Bloom‘s wife’s week-long trip to South Korea, where she’s been hosting various events and even threw out the first pitch at a baseball game.

And while she may not be wearing much clothing in her latest shoots, she’s been blowing through stunning outfits on her tour of Seoul. Incuding her first 48 hours, in which she worefive diffent looks!

What do you think of Miranda’s latest cover?