MANGO Launches New “What Should I Wear By MANGO” Web Series 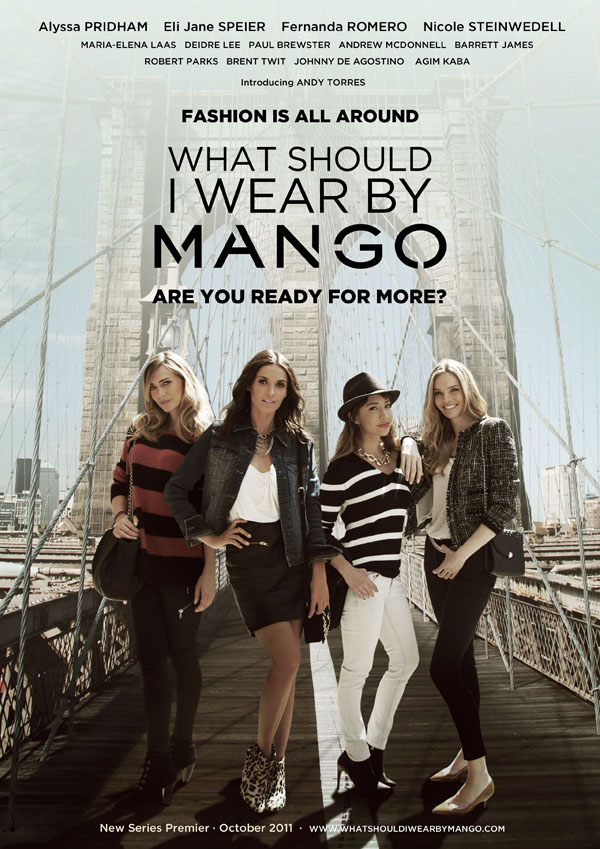 MANGO MAINTAINS THE CONCEPT OF “WEBISODES” IN THE LATEST EDITION OF

“WHAT SHOULD I WEAR BY MANGO”

Barcelona, 13 September 2011 – MANGO, Spain’s most international fashion company, will launch the latest edition of What Should I Wear by MANGO on 6 October, the brand’s microsite which offers practical styling tips, inspired by the US hit television shows like Sex and the City.

In its eighth series, MANGO decided to make radical changes to its videos offering styling tips and turn What Should I Wear by MANGO into an online series with fashion playing a starring role. Consequently, MANGO became the first fashion brand to create its own fictional fashion series.

Following the success of the previous season, with more than 2 million visits to the site, MANGO decided to opt for the same format, adapting the script and casting to a more adult audience, in accordance with the company’s global communication strategy.

The series, a spin-off from the previous series, recovers Fernanda Romero (an actress who has shared a billing with Eva Longoria, Jessica Alba and Christian Slater) in the role of Taylor, who is accompanied by three new friends: Alyssa (Alyssa Pridham, an actress and singer who worked under the orders of Woody Allen in Melinda & Melinda), Julia (Nicole Steinwedell, cast by Tom Ford for “A single man”, in his directorial film debut) and Sarah (Eli Jane Speier, who has starred in numerous hit series like Entourage, CSI NY and Bones). What’s more the internationally-famous blogger and MANGO It-Girl, Andy Torres (stylescrapbook.com), will make her acting debut by appearing in one of the episodes.

Fashion, love, friendship and ambition will be the key themes in the story of the four friends. The series, consisting of 6 episodes, each lasting 10 minutes, will be available in 10 languages: English, Spanish, German, French, Turkish, Russian, Polish, Chinese, Japanese and Arabic. Every week, it will be possible to watch a new episode on the www.whatshouldiwearbymango.com microsite. Websurfers can watch the trailer at: http://www.youtube.com/watch?v=yX9kuymJXR0

MANGO has been the pioneering Spanish fashion brand in the online sector. Its first company website was created in 1995 and its first online store opened for business five years later, in the year 2000. The brand currently has its own trends blog, Keep the Beat, has been on Facebook (www.facebook.com/mango.com) since 2009, is on Twitter, with 2 profiles (twitter.com/Mango and twitter.com/HeByMango) and on YouTube, with a Premium channel: youtube.com/mangofashion and Instagram (Mangofashion).

All you fashionistas out there this series is a must see!