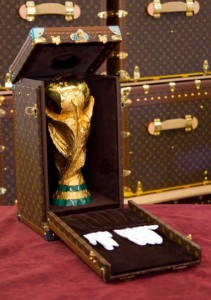 The World cup starts on June 11, a day everyone is waiting for. Who isn’t excited… we all follow the big event in one way or another, whether we like football or not. I for one don’t know much about football, but I do know some fashion news… I just had to share this latest news with all my Lebanese friends! Louis Vuitton just unveiled the exclusive travel case it has created to hold football’s greatest prize, the FIFA World Cup Trophy.

The special order case which was handmade by a single master craftsman in Louis Vuitton’s historic Asnières workshop near Paris, has been designed to carry the much anticipated solid gold Trophy, which measures 36 cm in height, weighs 6.175 kg. Its base is made off semi-precious malachite. The travel case, specially commissioned by FIFA, is covered in LV’s iconic canvas. Its finishing details are nothing less than perfect to complements the Trophy’s rich gold.

On July 12, the LV case which opens at the front and at the top to allow the Trophy to be removed easily, will be watched by many millions of people across the globe as its being presented to the FIFA’s 2010 winners.