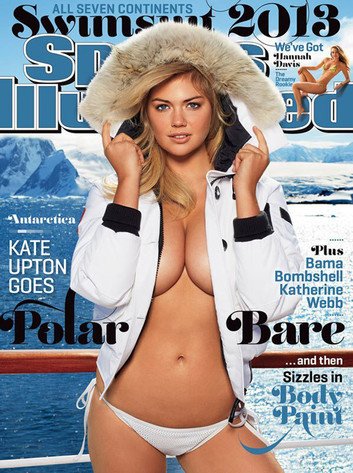 Kate Upton has been revealed as the Sports Illustrated Swimsuit Issue cover girl! It’s the second year in a row the blonde beauty has had the distinction.

It actually marks Upton’s third straight appearance on the swimsuit cover, counting an inset photo in 2011, when she was named SI’s Rookie of the Year.

Oh, how far our girl has come …

SI took her down to Antarctica for its “Polar Bare” theme, which may have single-handedly posed a greater threat to civilization than climate change.

With a body like that, Kate Upton has no regard for human life!

“We can finally talk about Antarctica!!!!! Took us 2 months to thaw out,” she tweeted Friday after the much-anticipated cover was revealed to the masses.

During her shoot in Antarctica, Kate reportedly had to strip down for mere minutes at a time to avoid frostbite. Who says supermodels don’t work hard?

Hopefully, for those tens of millions buried by Winter Storm Nemo, this cover will provide a brief respite, even if her hotness alone can’t melt glaciers.

The only other models to command the SI Swimsuit Issue cover multiple years in a row: Christie Brinkley, Elle MacPherson, Paulina Porizkova and Tyra Banks.

We can’t wait for more photos from the spread to be released, and you can guarantee we’ll post them. In the meantime, enjoy, and tell us …

Newer Post Grammy Winners 2013: The full list of winners at 55th annual Grammy Awards
Older PostRecharge your iPad, mobile phone and any other personal gadget… using your own BODYHEAT