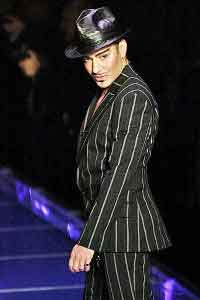 French fashion house Christian Dior said that it fired its chief designer, John Galliano, following accusations that he made anti-Semitic outbursts at a Paris bar. Sidney Toledano, Dior Couture’s chief executive, said he condemned “in the strongest terms” the words of Galliano, “which are in total contradiction with the essential values that have always been defended by the Christian Dior house.”

Dior said it had “immediately suspended relations” with Galliano and that it had “initiated dismissal procedures.” A video, posted on the website of the British tabloid The Sun, appears to show Galliano taunting other patrons at the bar, La Perle, declaring in a slurred voice that “I love Hitler” and that “people like you would be dead,” and “your mothers, your forefathers” would all be “gassed.”