Fashion, Featured, Videos
BNL
Dragonfly, under Edward Dada’s creative wand, made clothing for bands individually, producing tour shirts for everyone from the Rolling Stones to soloist Bill Clinton. Dada is his mother’s maiden name. And that the Dada movement, which he greatly admires, has a magnificent art piece that is a Dragonfly and soon Edward Dada brand name. Dada was the first ever in the history of fashion world to create Rock ‘n’ roll album art on board-shorts and button-down shirts. Eddie was also the first person to co-brand & design for Hard Rock Cafe & Harley Davidson and earned the first rank at the largest fashion tradeshow in Las Vegas in 2002 for Best Booth Award.
In an exclusive interview with BeirutNightLife, Edward Dada told us the story behind the great success this brand has achieved during the years in the states and his expectations in his homeland. 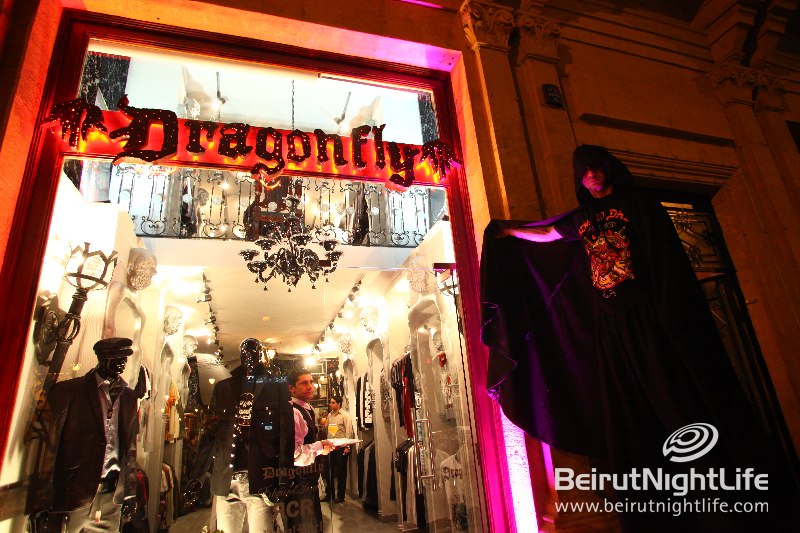 Name: Edward Dada
Nationality: American Lebanese
Location: HOLLYWOOD CA/ Foch St.-Beirut Lebanon
Edward said: “My grandfather moved to the states in early 1920’s with his brothers. They opened a little department store carrying American denim brands. My dad on the other hand left Lebanon in 1955, also starting a clothing business. Am considered to be from the third generation born in the U.S with clothing business already in my veins. We have chosen to open in the most prestigious location in Lebanon to attract as much people as we can. Foch st is like saying Rodeo Dr in Beverly hills or Bond street in London. Its where the elite of all the major brands are the Dior, Diesel Kenzo & now Dragonfly.”
Dragonfly is his first brand and his baby. Edward Dada is his second brand thats next???
Rock n roll lifestyle, Hollywood night life…… His inspirations come from as little as art on a tea cup to the feeling & vision he can get from inside about what does he feel like wearing in the summer time, “Because its very important to me to share my fashion & success with my people and if i can influence some young lebanese designer to keep Rock n Roll fashion alive, then i did my job. Thats one of the main reasons we chose to have Dragonfly in Lebanon,” added Dada.

Eddie also mentioned some of the great achievements that the brand has made in tha past few years: “I was also the first one in the history of fashion world to create Rock n Roll album art on boardshirts and buttondown shirts. I was responsible for 55 different bands and I have been on the front page cover of the Los Angeles business section and many other famous publication such as Rolling Stones Magazine. I also was the first person to co-brand & design for Hard Rock Cafe & Harly Davidson. We also got the first place at the largest fashion tradeshow in Las Vegas in 2002 for best booth award. And being on the Janice Dickenson modeling agency reality show 2 seasons in a row.”

The brave American Lebanese mastermind Edward Dada and his creation Dragonfly, the wildly successful clothing line in Hollywood, is now in Lebanon. The renowned brand was founded in 1994 when Edward has created a whole new category in clothing, revolutionizing the fashion industry without forgetting his origins, the land of the Cedars. Edward’s masterpieces all carry messages to the public in a Rock ‘n’ Roll, cult film and Goth images. Messages for freedom, peace, death, and war.

Dragonfly is in now in downtown Beirut on the prestigious Foch Street, bringing brave Rock ‘n’ Roll couture at its finest from Hollywood to Beirut city!