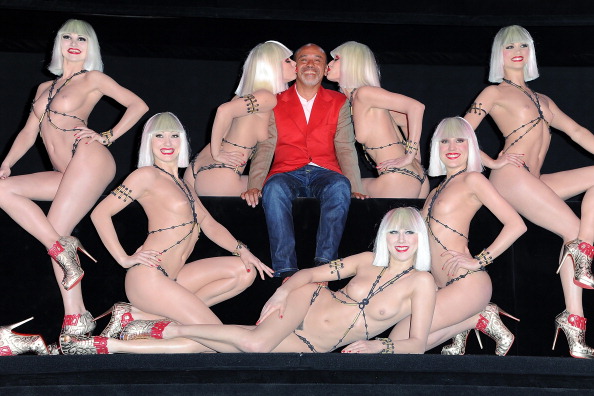 Celebrating 20 years in the shoemaking industry, Christian Louboutin is collaborating with the infamous topless burlesque venue, Crazy Horse Paris to direct a show called ‘Feu’ based on his famous red soles.

Louboutin explains: “Crazy Horse is an iconic Paris monument, a monument to dance, a fantastic, modern idea of the celebration of women for women…I am interested in all things that celebrate and enhance the female form.”

“Showgirls were actually my first (design inspiration), so it’s really funny that after so many years of having [created footwear] for showgirls in my imagination, I ended up really working with them,” he continued.

Louboutin didn’t just design the shoes, he’s taken on the role of “Guest Creator” and has directed a series of “tableaux, inspired by many eclectic worlds from hip hop to art masterpieces, which constitute a personal look at femininity in all its forms.”
David Lynch and Swizz Beatz composed the show’s original music – and that should paint a clearer picture for you on what the show’s going to be like.

Andrée Deissenberg, the Managing Director of Crazy Horse Paris Group, said:
“Christian Louboutin and Crazy Horse Paris are symbols of Parisian life whose worlds know no borders; symbols of the world of creativity, wonder and modernity. They share the same sources of inspiration – Women, of course, but also the world around them – and both are exceptionally skilled at producing unique and surprising creations. This is why Christian Louboutin was the natural choice as our first Guest Creator.”

Louboutin told the NYT, “In the show, we started by showing just the lower half of the woman, then the upper half then went into a play on the question of sexuality.”

Speaking of sexuality, Mark Fast, the designer notorious for his skimpy open knits, designed some of the costumes for the show. “Mark said whenever he works with clients he is always being asked, ‘Can you cover more?’ ‘Can you cover more?’” Louboutin said. “Here, we asked him can you cover less. He felt liberated.”

As you can see from the photo above, he covered a lot less indeed.

‘Feu’ opened on March 5 and will continue till May 31. In case you’re in Paris during this time, be sure not to miss out on this show that is a must-see for every fashionista and trendsetter out there.