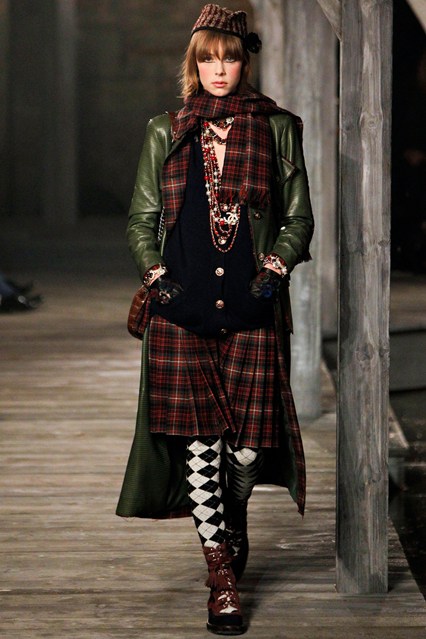 VOGUE editor Alexandra Shulman says that Karl Lagerfeld’s Chanel Metiers d’Art spectacular last night was a “truly exceptional show”. The event was staged in the ruins of Linlithgow Palace, near Edinburgh in Scotland.

“Karl’s interpretation of traditional Scottish dress was exquisite and imaginative and to say the setting was magical is a huge understatement,” she told us this morning. “It was one of those evenings where you just felt so privileged to be there.”

Unsurprisingly, tartan and tweed were key themes – as worn by Cara Delevingne, Stella Tennant and Edie Campbell on a catwalk that encircled medieval-inspired baskets of fire. Guests sat underneath a wooden awning as the show took place, with refreshments in the form of hot ginger and whiskey to help ensure no one felt the snowy weather. Afterwards, an exclusive dinner was held overlooking a nearby loch – at which six bagpipers provided the evening’s soundtrack, before British musician Jake Bugg performed.

The luxury fashion house has had a long-standing love for Scotland. Coco Chanel had always used Scottish wool in her creations, but her fascination with the country was heightened when she started a romantic relationship with the Duke of Westminster in 1924. The pair would often visit his numerous estates in the Scottish Highlands, occasionally joined by Winston Churchill. The tweed jackets and Fairisle jumpers that the Duke wore to go hunting and fishing during these breaks inspired the designer’s work for years to come.