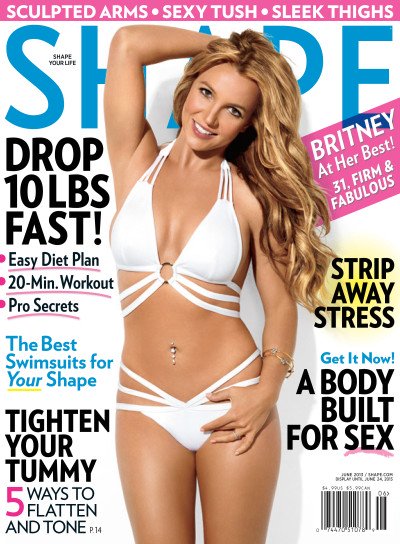 On the new cover of Shape, Britney Spears shows off an amazing bikini body.

It’s a body practically built for … well, we’ll let the cover do the talking here:

When Shape teases “A Body Built For Sex,” it may not be talking about Brit.

Still, the headline is next to one of the Britney Spears bikini photos ever.

Here’s what else the svelte 31-year-old entertainer had to share with Shape, and its readers, besides the outstanding figure that speaks for itself …

On her upcoming shows in Vegas: “They’ll be a massive party from start to finish. And to pull it off, I have to be in top condition and running at full speed.”

On fitness: “I’m doing 90 minutes of yoga twice a week in addition to a lot of cardio, hour-long sessions three times a week with my trainer, Tony Martinez.”

On dieting: “Dieting can be tough … because my specialties are spaghetti, brownies, and chocolate chip cookies. I try not to make those too often.”